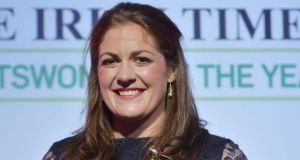 Fiona Coghlan, who captained Ireland’s womens rugby team to their first-ever Six Nations Grand Slam this year, was crowned The Irish Times/Irish Sports Council ‘Sportswoman of the Year for 2013’at an awards ceremony at the Shelbourne Hotel, Dublin. Photograph: Alan Betson

She signed up for rugby in freshers’ week at the University of Limerick out of curiosity and just for the fun of it, if you’d told her then that a decade and a bit later she’d be captaining Ireland to their finest hour she’d have laughed. It’s been a long sporting journey for Fiona Coghlan and for Irish women’s rugby in general, but St Patrick’s Day in Milan was a very special stop along the way, their 6-3 win over Italy clinching the Grand Slam.

Ahead of the campaign, Coghlan talked only of targeting a top-four finish in the Six Nations which would secure qualification for the 2014 World Cup, but those ambitions became a little loftier as they progressed.

They opened with a trip to Wales, a 12-10 win in Port Talbot giving the Philip Doyle-coached team a notion they might have a half reasonable campaign – and might even better their previous best finish of third.

The squad
Next up, though, were England – Six Nations champions 13 times since the tournament began in 1996. Though some of the leading English players were left out of the squad so that they could focus on the World Cup Sevens in June, the favouritesbegan with a 76-0 thrashing of Scotland in their opening game.

Add to that Ireland’s record against England – played 17, lost 17 – and hopes can’t have been too high ahead of their meeting in Ashbourne. The result? Ireland 25, England 0.

“A special day, everything just seemed to click, everyone did their job, it all just fell in to place,” said Coghlan. Alison Miller scoring a hat-trick of tries, full-back Niamh Briggs completing the scoring with a try, conversion and penalty.

“I always said I’d retire happy after beating England,” said Coghlan, “but we just kept taking another step and another step: the Triple Crown ….. the Championship.” And more.

They beat Scotland 30-3 to secure the Triple Crown but they had only ever beaten France once, so the Championship still looked like a reach.

The year before, though, they lost to France by just a point after their much publicised farcical trip to Pau, one that took 17 hours and had them arriving in the city on the morning of the match after an overnight train from Paris.

By virtue of their 15-10 victory over France in Ashbourne they clinched the title.

“People ask me if I have come back down to earth, but I don’t think I’ve been up there yet,” said Coghlan after that weekend, no time for partying just yet, the focus then on sealing the Grand Slam in Italy.

With the ever-prolific Briggs scoring the two penalties that clinched the win in horrendous weather conditions in Milan, Ireland secured their aim.

And with that it was back to work for Coghlan, as a teacher in Lucan Community College. Her students don’t usually seek a teacher’s autograph – it can appear in their “journal” as a “bad note”. This time, she was besieged with requests for her signature. Ms Coghlan, after all, had captained her country to one of the year’s most memorable sporting achievements.

Fiona Coghlan, then, is our sportswoman of the year for 2013, for her own performances in a wonderful campaign, for her pioneering commitment to her sport and as a representative of the team.

“Rugby,” she said “has given me so many brilliant opportunities, so many wonderful experiences, I’d love more people to get that chance. If our success, and the exposure we’re getting now, leads to more girls getting involved in the game, that would be the best thing of all.”

1 Gerry Thornley: England primed to show their best against Ireland
2 Should fans be allowed drink in the stand at sporting events?
3 Man City’s Abu Dhabi owners not the sort to back down over ban
4 Stopping Jonny May’s pace must be high in Ireland’s priorities
5 Mako Vunipola to miss Ireland game for family reasons
Real news has value SUBSCRIBE

Son Heung-min out for several weeks with broken arm 12:48
Mako Vunipola to miss Ireland game for family reasons 12:51
Man City’s Abu Dhabi owners not the sort to back down over ban 10:51
Pints and sports events; England ready to show their best 07:30
Frank Lampard says Harry Maguire should have been sent off 06:36
Here is your handy guide to sport on television this week