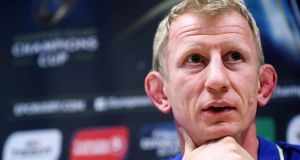 Leo Cullen has paid tribute to fellow provincial coach Anthony Foley ahead of Leinster’s journey to south of France to play Montpellier on Sunday.

Cullen and Foley shared a similar career path, having come through the age grade ranks three years apart before both going on to captain and then coach their home provinces.

“It’s been a really strange week,” said Cullen. “It’s really hard to tell how other people react but for me personally Axel was somebody I knew and was aware of since I was 14 years of age. He was the number eight on the Irish schools tour in ‘92 that went to New Zealand. I was the number eight on the Irish school tour that went to Australia four years later in ‘96.

“I always would have watched him, been aware of him at that stage and his progression. When he made his debut for Ireland, I remember it well. Watching him with Shannon, watching him with Munster and going on to captain Munster.

“We played as teammates with Ireland and shared rooms together so it was a really tough time, to see what’s happened.

“It’s very difficult to have any reason to it. Our thoughts are with his family at the moment and obviously with all the Munster players and their staff as well. We can’t even imagine what they are going through at the moment. We wish them the very best for what’s ahead this weekend and beyond.”

Mason Jones not interested in being the Welsh Conor McGregor 12:01
Charles Byrnes’ licence withdrawn after runner ‘nobbled’ with a sedative 12:52
JP McManus Pro-Am deferred for a year due to Covid 10:45
James Harden stars as Brooklyn Nets edge Bucks in thriller 09:17
Spanish player says Australian Open quarantine is like prison 09:06
Crossword Get access to over 6,000 interactive crosswords