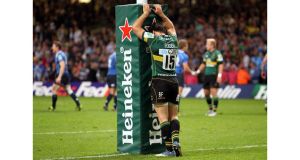 Northampton fullback is left stunned after Leinster came from 16 points down to win 33-22 at the Millennium Stadium. Photograph: David Jones/PA Wire

Leinster 33 Northampton 22: The final scoreline said little about this epic Leinster comeback from 22-6 down at halftime to their second Heineken Cup success in three years. Buried beneath a hapless first half in which Northampton scored three tries to nil, Leinster came out after the break to put on one of the most stirring revivals ever seen in European Cup history, running in 27 unanswered points and claiming the trophy in an extraordinarily dominant 40 minutes.

Over 72,000 watched as Leinster finally found the form that had them ranked as clear favourites coming into the Millennium Stadium. But few could have predicted the manner in which they went about their business and few will ever forget.

It was a horrible first half for Leinster on a number of fronts, not least because they offered up the three tries. Their scrum was destroyed, largely by loosehead prop, Soane Tonga’uiha and even when tighthead prop Brian Mujati was sin-binned on 27 minutes for pulling back Cian Healy, Leinster were being pushed back.

The Leinster pack has rarely looked so frail and that weakness supplied so much confidence to Northampton each time they went to a set piece. The wellbeing also seemed to feed to the Saints backline, who were confidently moving the ball around in the way many had expected Leinster to do

Northampton’s first try arrived after just five minutes. Winger Paul Diggin made the ground as Gordon D’Arcy raced up to the tackle and was side stepped.

Lee Dickson took it up, fed to flanker Calum Clark who beautifully off loaded to Phil Dowson. Steve Myler converted for 7-3.

While Jonny Sexton landed a penalty for 7-3, Myler extended it again with the boot. Leinster’s only dangerous passage arrived midway through with a Shane Horgan half break that put Brian O’Driscoll flying down the pitch only for a super cover tackle from fullback Ben Foden to prevent a try.

It was Foden who then delivered on 31 minutes. Myler broke down the 10 channel and the ball was recycled to Foden in support, who squeezed past O’Driscoll.

The conversion made it 17-3 before Dylan Hartley forced the third try on the whistle, a tangle of bodies in the right corner pouring misery on the Irish side. Referee Roman Poite had to go to the TMO but the try stood with Leinster chasing the match at 22-6 down.

And then it all changed magnificently for the Dublin side. On 44 minutes Sexton touched down after Leinster went through the phases. He converted for 22-14. On 50 minutes it was Sexton again as Leinster took ownership of the ball. Again he converted for 22-20 and the Irish side looked unstoppable. A penalty from the man-of-the-match made it 22-23 as Leinster surged in front for the first time on 55 minutes.

A yellow card to back row Dowson allowed Leinster even more space and they went swarming all over Northampton full of gusto and intent. This time the ball went up the right, second row Nathan Hines finally forcing his huge frame over the line and Sexton converting for 22-33.

There the nightmare ended for a gutted Northampton, replacement Leinster outhalf Ian Madigan kicking the ball away as the clock ticked into the red and dejected, disbelieving players falling to their knees around the stunned stadium.