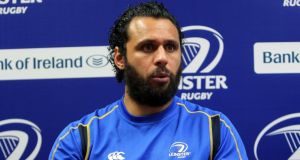 Even as he looked you in the eye and repeated it ad nauseum it was hard to believe that not only would Isa Nacewa not be playing for Leinster again after this season, nor would he be playing professional rugby again either. But Nacewa was adamant.

This was, he stressed, purely a family decision, so as he and Simone’s three young Irish-born girls can be reared around their extended family in Auckland. But given he is such a freakishly natural talent and athlete, and that he’s merely turning 31 this summer, it’s still hard to credit.

“I’ve said that to him about 15 times,” quipped Leinster manager Guy Easterby, a figure which Joe Schmidt could probably double. But Nacewa maintained he was sure in his own mind.

“I am. I told you I did want to retire here and I’m happy with what I’ve achieved here at Leinster, and that’s the main thing. The environment is special and I want to come back here in 20 years’ time and watch games at the RDS and wear a Leinster jersey, and I’m happy with that.”

Three Heineken Cups in his five seasons has also made for the most rewarding period in his career. “It’s a different environment in Auckland but I’ve loved my time here at Leinster and I think playing with the quality of players here has made it that much more special. In 20 years time I can tell everyone I played with Shaggy and Drico and Girv. They’re all guys that I always admired and I’ve had the privilege to play with.”

Nor has he ever had the same rapport with a set of supporters. “Yea definitely. The fans here, I’ve always said, are second to none. They’re the most passionate fans that I’ve been around and the RDS is a special place.”

Hence, “losing at the RDS at any time would be hands down the worst moment. Those ones hurt for a long time”.

Favourites? “Too many to think of.” Favourite try, that match-winner in the quarter-finals against Leicester at the Aviva in 2011? “Nah,” he smiled before adding: “Team tries, any of the team tries. I think we scored a good one against Saracens, I think I got on the end of a nice touch from Drico.”

As Nacewa was under contract for another season, Leinster are permitted to replace him with another nominated left-winger from overseas who may be allowed to play in another position with the IRFU’s permission, although it remains to be seen how long a contract will be sanctioned.

There had been no contact with All Blacks’ winger Corey Jane, and it is understood that a South African replacement is likelier, with Easterby not ruling out a move for Zane Kirchener, of whom Nacewa spoke very positively.

“While Isa has been an absolute legend here, and that’s without question, both on and off the pitch, Isa was not going to be here for ever and we were always going to have to replace him,” said Easterby, who pointed out that whether or not the replacement was rated as one of the best in the world, “until they fit into our team and how our team plays you’re sort of doing a bit of guess work.

More pressingly, Leinster host a Glasgow side this Saturday that have hoisted themselves to the top of the Rabo PRO12 on the back of seven successive wins, and the province’s Six Nations casualty list numbering Eoin Reddan, Jonny Sexton, Gordon D’Arcy, the suspended Brian O’Driscoll (only on foot of receiving the disciplinary panel’s written report will Leinster decide whether to appeal or not), Luke Fitzgerald and Fergus McFadden.

D’Arcy is expected to return this weekend, however, with Richardt Strauss and McFadden to follow soon after, while a decision has still to be made on which of their Six Nations contingent will be rested. Nacewa’s third last league game at the RDS is liable to swell the attendance. There is, of course, also the carrot of, potentially, one or two PRO12 knockout games there, not to mention an Amlin semi-final and even a final.

“We don’t like looking ahead but when we dropped out of the Heineken Cup the next thing we saw on the schedule was the final at the RDS for the Amlin,” admitted Nacewa, “so obviously it’s a long way out but it would be ideal.”

And, as he’s also “lost every final” in the league, there are still a couple of boxes to tick.