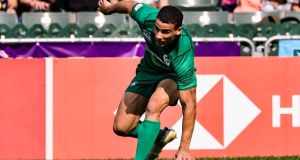 Ireland Sevens are through to the semi-finals of the World Rugby qualification tournament in Hong Kong, having defeated Russia 47-0 in Saturday’s quarter-final.

They will face Germany at 5.32am (Irish time) on Sunday. The Germans were pushed all the way in their own quarter-final against Uruguay and it took a try on the hooter to send them through with a 12-7 win.

Chile will face hosts Hong Kong in the other semi-final, with the overall winner of the qualification tournament earning a place as a core team on next season’s World Rugby World Series.

Anthony’s Eddy’s side finished their pool series off with a 33-7 win against Russia - and they were even more convincing winners over the same opposition in the last eight thanks to two tries apiece from Jordan Conroy, Terry Kennedy and Greg O’Shea while Harry McNulty scored his first try of the tournament.