Women’s Six Nations: Demands of Sevens open doors to others 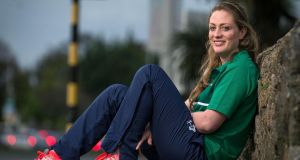 “The goal is to win the championship, 100 percent . . . But this also gives us a chance to build a really good squad of 35 or so players ahead of the World Cup.”

The professionalism of Tom Tierney’s amateur squad is further bolstered by this season’s permanent switch to Donnybrook. The 1pm slot on alternative days to the men’s international, starting Saturday against Wales, plants a flag for young supporters to gather round.

“The surface is good and quick, like playing on cushions” said Briggs of the 4G carpet. Last time the Irish women set foot on an all weather pitch they needed to beat Scotland by 27 points. But the scent of blood saw them run wild in last March’s 73-3 victory.

Tralee and the GAA or Tralee and basketball sound familiar but rugby and the Kerry town in the same breath should not seem so strange any more. All fertile GAA and basketball patches have become a hotbed of recruitment of Irish rugby internationals.

“We were speaking about this about a year or two ago with the men as well,” said Tierney. “The natural attributes that you have to have with a Gaelic footballer, a hurler or camogie player all add to being a footballer. From a women’s perspective it is very easy to translate those attributes from other sports into a good rugby player.

“We are under no illusions that this is a huge advantage for us to have this potential resource of player recruitment. I know other sports won’t want to hear that but that’s just the way it is.

“How quickly these Gaelic footballers, and basketball would be another one, can adapt and learn the game is hugely impressive. They have basics, whether they realise it or not, from playing their other sports.”

It comes in very handy over the coming weeks with Tierney still hopeful that Sevens players will be made available for the the last two matches of the Six Nations at home to Italy and Scotland. And possibly even for Twickenham, straight after the men’s game, on February 27th.

1 Six Nations: No place to hide for Ireland’s misfiring captain
2 Contepomi says Leinster can learn lessons from nature of Ireland’s defeat
3 From stationary carriers to centres of excellence - five things we learned
4 Questions raised over Ireland v Italy fixture due to coronavirus
5 McIlroy takes his foot off the pedal and will skip the Honda Classic
Real news has value SUBSCRIBE