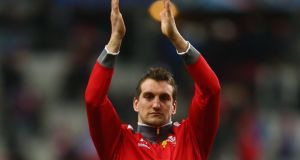 Wales say Sam Warbuton will return to training this week despite concerns over a knee injury. Photograph: Michael Steele/Getty Images

Wales have been buoyed with the news that captain Sam Warburton is expected to be fit for the vital RBS Six Nations clash with Ireland on March 14th.

Warburton suffered a knee injury in the 20-13 victory over France in Paris on Saturday night which catapulted Wales back into championship contention.

The 26-year-old had ice applied to the knee immediately after leaving the field at the Stade de France and it had been feared that he would miss the visit of Grand Slam hopefuls Ireland to the Millennium Stadium.

But the Wales management team have said Warburton will return to training later this week and the openside flanker’s deputy Justin Tipuric has been released from the squad to play for his region the Ospreys this weekend.

“Sam suffered a contusion to his knee,” said a Wales team statement on Monday evening.

“He will continue to be monitored by the medical team and will return to training later this week.”

Outhalf Dan Biggar, who scored Wales’ decisive try against France, will also return to training later this week after suffering a hip injury in Paris.

But Bath loosehead prop Paul James, a late second-half replacement for Gethin Jenkins in Paris, has been ruled out for the rest of the tournament with a fractured thumb and will miss the next four to six weeks.

Wales announced earlier that they had released 12 players back to the regions this weekend, among them Tipuric and British and Irish Lions winger Alex Cuthbert who was dropped for the Paris victory in favour of Liam Williams.