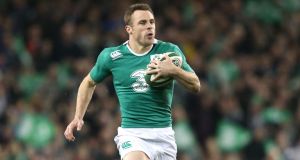 Tommy Bowe’s naturally sunny disposition intermittently clouds over for a moment or two when the word ‘pre-season’ is introduced to the conversation.

It’s emblematic of the physical distress that the players are currently enduring both with province and - for those in Joe Schmidt’s 45-man World Cup training squad - Ireland. While England are in Colorado, France and Scotland in the Pyrenees and Wales in Switzerland before heading for Qatar, the Irish players are splitting their pre-season between province, the national team’s base at Carton House, and this week, Galway.

Bowe isn’t pining for foreign climes, focused instead on a day in the foreseeable future when the aches and pains are less severe. “Pre-season is going to be a little shorter because of the games coming up,” he explained.

“It’s a case of trying to get our fitness and strength levels back up to where they were at the end of the season as quick as we can. Players were told to go off and put your feet up, enjoy your recovery but at the same time not lose your shape. It was very important that players came back to training in shape because we have to get ourselves up to international level is a very short time.

“I went away and had a great holiday, got married, enjoyed myself, put the feet up and enjoyed a bit of sunshine. Pre-season is as tough as ever, if not tougher.

“Last Sunday week we (Ireland) came together. There was a huge buzz around the squad. Everyone was in great form. We hadn’t seen each other since the end of the Six Nations; we’d just come back from a couple of weeks holidays and everyone was refreshed. Everyone always comes back the first day looking forward to it and excited and then you hit the pitch and they send you off to do crazy stuff to break you. Then it suddenly gets very quiet, people stop talking.”

Rather than travelling abroad the Ireland and Ulster wing espouses the value of being able to spend some time at home given the playing commitments in August, September and October.

“I know a lot of the Welsh guys who are off up in the Swiss Alps and heading off to Qatar and doing all sorts of crazy stuff; I’m sure their training is exceptionally difficult but I don’t think you need to go too far to feel the sort of pain I was in last Tuesday or Friday.

“The Ireland squad is very close knit. We get on very well with each other. I think that going into a World Cup some of the senior players would have chatted to the coaches and pointed out how nice it would be to spend a bit of time at home because when these four internationals (in August and September) come up you are going to be spending a lot of time together.

“Then the squad will be going off to a World Cup for an even longer duration of time. It’s very important to keep players fresh, down to getting home to your own bed and making your own food in the kitchen adds to that freshness. As a squad we are very happy with the set-up we have here and hopefully it works.”

The disappointment of previous World Cups is not a millstone for the current Irish squad. The genesis for the mental resolve can be traced back to the New Zealand match in the autumn of 2013. Whatever the public expects it’s nothing that the players don’t demand of themselves and each other.

Bowe explained: “In years gone by I think Ireland have enjoyed being the underdogs but with the players we have in the squad now, the coaching staff, the fact that we have won back to back Six Nations Championships, we can shoulder the expectation. Everybody in Ireland wants us to be out there winning things.

“I suppose that comes with being successful and I think that sort of expectation is great. It drives us forward as a team. But for us to hold it together the whole way through (a World Cup), I think that is something we have been building on since that All Black game, two autumn international series ago, where we let it slip in the last couple of minutes.

“That was a real shock for the team, a real learning curve. Since then we have learnt a lot of things and hopefully when it comes to the crunch matches like it has in the last couple of Six Nations (Championships) that we can be strong and get the wins.”

The Ireland wing understands the four World Cup warm-up matches will define the composition of the final 31-man tournament squad. “The amount of players that are in the squad, in the back three positions ... every player will get an opportunity to put their hand up. I don’t know how much of an opportunity we’re all going to get but for me if you get three chances or one chance you have to take it.

“That’s the way Joe is; if you don’t look like you are up to the mark and you can’t do the job for the team, then you would expect to be cut.”