The grassroots Down Under are in urgent need of some nourishment 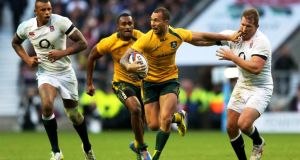 I am a ‘Quade doubter’ but I have to admit, I have been mightily impressed by Cooper’s performances since his return. Photograph: Warren Little/Getty Images

The racist remarks that were thrown about in Australia at the end of New Zealander, Robbie Deans era as Wallaby coach, made me ashamed to be part of the Australian rugby community. To the vast majority of commentators it was Robbie’s nationality that was the cause of the Wallaby’s problems.

It was xenophobic ignorance. Robbie, a great rugby man, gave his best and for his efforts over five years, Australia treated him appallingly. The argument was put to the Australian rugby public that an Australian coach would solve all the problems.

Like every coach, Robbie Deans made errors, but the demonisation of his nationality was simply ugly and wrong.

Ewen McKenzie is an excellent coach and a man of integrity. I worked as an assistant coach at the Waratahs when he was a player in the early 1990s. I coached against him when he played with the Brumbies. We met again when I was coaching Ulster and he was in charge of Stade Français.

His selection is a very good one, but the deep structural and technical problems that face Australian rugby are not under the control of the national coach. These problems are the real cause of the gradual decline in the Wallabies’ game.

The problem with the past decade of Australian rugby is that the overwhelming focus of the ARU (Australian Rugby Union) has been on the Wallabies and not the total game in Australia. It is a fact that short-term planning leads to long-term problems. Regrettably, Australian rugby is reaping the sorrows of a lack of long-term strategic thinking.

The playing standards of the feeder systems below the professional level, that were once so magnificent, have declined to the point that they are impacting on the Wallaby performance because, like Ireland, there is an alarming lack of depth of quality players.

I have been writing and speaking about the eroding standards of Australian rugby for several years. Unlike most other professional coaches, for the past 15 years, when I return to Australia, I always coach in schools. I was witnessing firsthand the standard of the playing future.

Despite talking to officials and writing to the ARU on several occasions, from which I received no reply, I have not witnessed any significant changes. To be honest, I don’t believe anyone is listening, because the truth is so painful to hear.

Basic skills
Each season I go back and coach in the schools, I see the standards drop just that little bit more. I see the skills that once sparkled like stars in Australian attack, dim a little each season.

Today we have to coach the most basics of skills that were naturally within schoolboy players just a decade ago. Footwork, attacking lines, passing, tackling, kicking . . . everything has to be taught.

Many of the problems with the Wallabies were not the making of Robbie Deans. They began long ago in the grassroots, under the stewardship of others.

The most important man in Australian rugby is not Ewen McKenzie, but Bill Pulver, the newly appointed ARU chief executive. He has the daunting task of convincing the ultra conservative and self serving heartland to restructure.

It is Bill’s strategic planning and his recruitment of people with “rugby corporate wisdom” that holds the key to Wallaby success.

Ewen’s role is to win today, Bill’s mission is to save the game in Australia, then set out a long-term plan for the rehabilitation of rugby. A gargantuan task.

The match today is a friendly with a capital “F”. The Wallabies who were raw during the Lions series, like Israel Folau, have grown in stature. Ewen’s management of Quade Cooper is paying dividends. I am a “Quade doubter” but I have to admit, I have been mightily impressed by Cooper’s performances since his return.

All things being equal, there is very little between these teams. But things are not quite equal. Ireland are on the first steps of their journey with Joe Schmidt. A win today would be an unexpected and wonderful tonic. Relatively, the Wallabies have travelled much further down the road with Ewen.

At the Aviva the Wallabies will hold a slight advantage.

In reality, if the Wallabies win or lose is of no dire consequence to Australian rugby.

The real battle lies is in the need to technically improve future crops of Australian players. The foundation of a new Wallaby dynasty is not on the training pitch, but in the boardroom. This is the real do or die battle for Australian rugby.