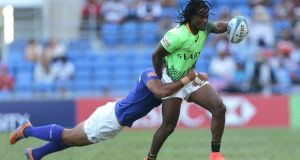 South Africa Sevens player Seabelo Senatla has been called up by the Springboks for their European tour. Photograph: Mark Metcalfe/Getty Images

South Africa have named five newcomers in their 36-man squad to tour the Europe , including exciting Sevens speedster Seabelo Senatla.

Coach Heyneke Meyer has resisted the temptation to experiment too much by naming 29 players who participated in the Rugby Championship, but did add some new names given the bloated size of the squad for matches against Ireland, England, Italy and Wales on successive Saturdays starting on November 8th at the Aviva Stadium in Dublin.

Aside from Stormers wing Senatla, the other new names are hooker Robbie Coetzee, prop Julian Redelinghuys and loose-forward Jaco Kriel, all from the Lions Super Rugby side, as well as Senatla’s loose-forward team mate Nizaam Carr.

“Seabelo’s speed is well-known to anyone who’s seen him play for the Blitzboks (Sevens national side) this year and he is now the third player from the Sevens set-up to be called-up to the Springboks, which is a great compliment to their structure,” Meyer said in a statement on Monday.

“Julian has been impressive all season and if it wasn’t for injuries, he might have been a Springbok already.

“Nizaam is a versatile loose forward who can play any position in the backrow and has proven his worth at flank and number eight this season.

“Jaco, who is really very fast for a loose forward and scored the most tries in the Currie Cup this season, is more of a traditional openside flank, a position for which we need cover following Francois Louw’s injury.”

There is also a return for two previously injured players, prop Coenie Oosthuizen and versatile back Johan Goosen, who will act as cover for regular fullback Willie le Roux.

“Johan is now playing most of his rugby at fullback and is performing very well in a position where I’ve always thought that he could become a great player. His versatility will come in handy if needed as he is a similar player to Willie in many ways,” Meyer said.

None of the Springboks’ overseas-based players will be available for the final match of the tour, against Wales in Cardiff on November 29th, as it falls outside the international Test window.