RWC #44: Huw Richards sees red for Wales against the All Blacks 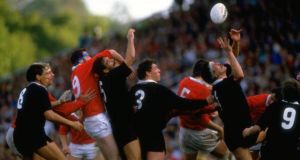 Wales have reached two World Cup semi-finals and on both occasions they have come away with questions of what might have been having had a man sent off.

In 2011 it was Sam Warbuton who was wrongly shown a red card by Alain Rolland after his dump tackle on Vincent Clerc was judged to be dangerous.

And 24 years earlier Wales found themselves in a similar position after Huw Richards was given his marching orders in their 1987 World Cup semi-final against eventual winners New Zealand, although his sending off was slightly less borderline.

Having been on the receiving end of Gary Whetton’s elbow, the brooding Richards took exception and cracked the All Blacks lock with a left hand at the back of a maul.

Pandemonium ensued, with New Zealand number eight Wayne ‘Buck’ Sheldon blindsiding Richards with a huge right hook, putting the big man on his backside and knocking him clean out.

After treatment from Welsh physio Tudor Jones, Richards regained consciousness and clambered back to his feet only to be greeted with a red card from referee Kerry Fitzgerald.

Somehow, Sheldon escaped similar punishment, and a 14-man Wales went on to lose 49-6.

Richards went back and had a successful career with Neath, but he never played for his country again.