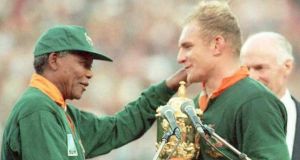 Having been excluded from the first two Rugby World Cups in 1987 and 1991 South Africa emergedfrom the dark shadow of apartheid to rejoin the elite in 1995.

South Africa’s debut in the tournament would take place on home soil. Their mantra while they had been out in the cold was “You are not world champions until you beat the Springboks,” and so it proved as they progressed to the final, where they would face New Zealand.

It’s a rare occasion when you find the odds are stacked heavily against the All Blacks, but at Ellis Park on June 24th Laurie Mains’ side weren’t coming up against 15 men, but an entire nation.

Before kick off the grand stadium had rocked as a Boeing 747 trembled across the sky above the giant stands, the message ‘Good Luck Bokke’ plastered to its belly.

The game itself was gripping and charged with emotion but was far from being the spectacle which was anticipated.

The All Blacks, who had destroyed sides and thrilled supporters throughout the tournament, lost the accuracy which had got them to the final, and were unable to feed Jonah Lomu. South Africa meanwhile executed their defensive strategy with aplomb.

Only two men got on the scoresheet, the 22-year-old Andrew Mehrtens and Joel Stransky, who brilliantly marshalled the Springboks pack and backline.

And it was Stransky who struck the decisive blow, sending over a winning drop-goal in extra time to crush the All Blacks and start the biggest party South Africa had ever seen.

What followed was one of the most important and enduring moments in modern history as Nelson Mandela, an elderly black man who had spent a quarter of a century locked up on Robben Island, came onto the pitch wearing a Springbok cap and jersey, a jersey which was symbolic of the white man’s game and the regime which had seen him imprisoned in the first place.

Mandela presented the Webb Ellis cup to Boks’ skipper Francois Pienaar and for the first time the Rainbow Nation was truly united.