Ross willing to prove himself worthy for World Cup spot 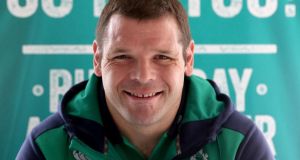 Joe Schmidt has never been accused of the emotional pick. When Mike Ross was dropped by former Leinster coach Matt O’Connor earlier this year, the person to prop up the tighthead’s confidence was the national coach. Schmidt was no soft shoulder, just more settled with what he knew.

Club and country are often seen through different lenses and when Denis Buckley and Nathan White were recently brought into the World Cup squad, Ross knew they were not just there as crash test dummies filling in the numbers.

“They were probably unlucky to miss out on the squad in the first place,” he says. “Joe’s philosophy is to keep everyone in the loop. If there are any injuries then they can step up and it’s a seamless transition because they don’t have any catching up to do.”

Ross is not a demonstrative player or known to give way to flights of fancy, his job too full of grunt and grind to strut or blubber. But earlier this year Schmidt handed him a green jersey after O’Connor snatched the blue and gave it to Marty Moore for January’s European game against Castres.

It wasn’t the first time Ross had been dropped. The abrasive Michael Cheika did too and Ross came back strong from that. But at scrum time Schmidt looks for sources of comfort and security and his eyes have not seen beyond the 6’2’’ (188cm) 35-year-old.

Against Italy in the Six Nations it was Moore’s obvious ability and versatility against the mileage in Ross, the gnarled experience of a warhorse, who still had some to give. O’Conner burned him but Schmidt saw the upside. Being picked for the Italian job was important.

“I probably wasn’t performing as well as I needed to, I was coming back from injury and the scrum hadn’t been going particularly well especially in those Harlequins back-to-back games. Marty and Tadhg (Furlong) were playing well and the in-form players got the nod.”

The lasting effect may have some benefit as Ross remains sharply aware of how things can change. Did O’Connor’s rejection hurt? “Of course it did,” he quips. “It’s never particularly pleasant to be dropped.”

From here the four matches before the World Cup kicks off are pivotal to players. Ireland open the Guinness Summer Series against Wales in Cardiff on August 8th, followed by successive home appointments at Aviva Stadium with Scotland (August 15th) and Wales (August 29th), before meeting England on September 5th at Twickenham. Ireland’s opening World Cup clash is against Canada in Cardiff on September 19th.

Ross admits that he doesn’t know what to expect but feels the pre-tournament games will deeply shape Schmidt’s thinking. He gives the impression that the coach is still open to persuasion.

“You know more than likely everyone will get a shot,” he says. “But at the same time you can’t go out and be a hero. Do what’s expected of you. If you look back to the last World Cup, Conor Murray came from nowhere and got a spot on the plane.

“They are not friendlies and they are not really warm ups. There will be a lot of highly motivated players because there is no World Cup squad being picked yet. He (Schmidt) is not really looking beyond that. Four games, anything can happen and that’s the unfortunate reality of the sport.”

1 Gerry Thornley: Wild reactions to this Ireland team as fickle as the wind
2 Munster were fever-tested when they arrived in Italy
3 England and Eddie Jones at the vanguard of rugby’s hybrid era
4 Dan Tuohy explains ‘rotten to the core’ comments
5 Barcelona nab away goal after going behind in Naples
Real news has value SUBSCRIBE