Reduced Western Forces still to be reckoned with by nervy Lions 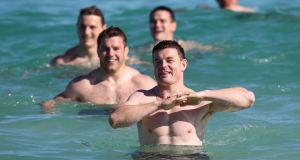 Yesterday was a bank holiday in Australia as well, which served to make Perth, for all its economic boom, even more sedate than normal. And with tomorrow’s State of Origin match along with the World Cup qualifier between Japan and Australia hogging the sports news, not to mention the greater sway of Aussie Rules hereabouts, the historic clash between the Western Force and the Lions may not be the launch of the tour which had been anticipated.

Had the Lions begun their tour here rather than Hong Kong last Saturday, things might have been different. In any event, with the Force having a bye weekend in the Super 15, and thus a 10-day run-in to this match, they now face two games in five days, with a “derby” against the Waratahs here next Sunday.

Alas, pending the overnight team announcement, Irish time, all the indications are coach Michael Foley will be splitting his forces for the back-to-back games.

And judging by yesterday’s open training session, Test players Hugh McMeniman, Pek Cowan and Alby Mathewson, and most disappointingly of all, 20-year-old prospective Wallaby centre Kyle Godwin, along with goal-kicking playmaker Sias Ebershon, were all seemingly being held back for the Waratahs.

That a “derby” should rank alongside the Lions’ first ever meeting with the Force’s Super entity seems puzzling given Sunday’s Australian rivals are over 3,300 kilometres, and over four hours by air, apart. In other words, Leinster and Treviso are more closely positioned rivals. More to the point, the Force won’t meet the Lions again for at least another 12 years, and Sunday’s result will not make a significant difference to their standing in Super Rugby, where they are 14th in a competition in which they cannot be relegated.

Even so, captain Matt Hodgson believes the Force can aid the Wallabies even if they lose. “They’ve probably come out and pencilled in victories in most of their games leading up to the Test matches, so if we can’t get the win, we’re going to give them a solid performance and hopefully hurt a few of their bodies.”

Typically feisty scrumhalf Brett Sheehan vowed the Lions would find things “bloody hard”, adding: “There were a few little things that got under their skin (in Hong Kong) so maybe we’ll do a little bit of the same.”

The Lions will be unveiling a new and eager, if nervy side of their own. Indeed, the build-up to the squad selection had made Ireland’s Tommy Bowe “probably the most nervous I’ve been coming up to a competition or a tournament or anything” after playing just two and a half games.

Never been fresher
Sidelined from December to April, the flip side is Bowe has never been fresher for a summer tour. “I think that’ll be a huge bonus for a couple of us. Once we get our match fitness up. I’ve had a good few games under my belt and the other boys have too. As long as you can stay injury free we’ll all be staying a little fresh.”

Bowe also has a different mindset to four years ago. “I was thrilled to be there, to be picked in the squad. This time my main priority is to get picked in the Test squad, but I want to win. That’s been the message from the outset. Warren’s here to do a job, he’s here to pick a team that’s going to go and win the series. He wants to be 2-0 up and I think that’s exciting for us as players because he’s breeding that confidence into us.”

He has also been renewing old acquaintances with former Ospreys’ team-mates: “It’s great. I get on very well with all the Welsh fellas. There’s a couple of real characters there, and you hear the Welsh boys down the back of the bus; there’s a good mixture but it’s generally the Welsh fellas that everybody is taking the piss out of.”

Bowe’s off-field responsibilities have seen him chosen on the social committee. “It could be a hard job,” he maintained, before admitting: “but I don’t think Australia will be too lacking in the social areas.”