A commanding performance from the gifted outhalf in front of a sell-out 52,000 Suncorp Stadium crowd could potentially give Robbie Deans some food for thought 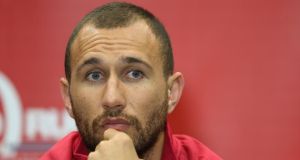 As is custom on Lions or Irish treks to Australia, the tourists trained in a school yesterday, namely the Anglican Church Grammar School in the suburbs of East Brisbane.

As is also invariably the case, you could readily understand why the Lions players availed of not just one of the pristine pitches there, but the school training centre and private outdoor swimming pool.

And so, yet again, you were reminded of how alike Australia’s fee-paying school-playing rugby union roots are to most other rugby playing countries.

Set amongst tree-lined, undulating pathways with beautifully preserved red-brick buildings and to a sound track akin to a bird sanctuary, “Churchies” celebrated its centenary last year.

Of the 1,800 schoolboys, who wear wide-brim hats over their uniforms, about 600 are boarders with annual fees for the non-boarders €15,000 a year.

In the room where the Lions held court for the media yesterday hangs only a handful of framed photographs hailing some of “Churchies” many sporting successes, with swimming and rugby union uppermost amongst them. One of the latter is from 2005, and is of “the Churchies’ First XV” which “won the Premiership at Nudgee”.

Though he had more hair then, indeed he had a “mullet”, and a beard accompanies the more pronounced widow’s peak nowadays, Quade Cooper cuts an unmistakable figure at the back, standing next to the trophy with one finger raised triumphantly to signal “First” and a hint of cockiness in his eye.

Cooper played for Churchie in 2005 and 2006 on scholarship, just a year or two after arriving from New Zealand. In his school days at Churchie, he’d hop two buses to get to training at the Reds Academy at Ballymore and represented Queensland Schoolboys from there and engaged in his first duels with NSW Schools outhalf Kurtley Beale.

Man amongst boys
Hunched in the frontrow is the equally identifiable David Pocock, whose locker was alongside Cooper in those days, looking like a man amongst boys even then. “Going through school, I didn’t have to make too many tackles, not with Dave Pocock beside me,” he once admitted.

Cooper’s positioning in that photo beside the trophy hints at his occasional games as captain, but for the first time since those days, and thus in his seven years with the Reds, Cooper has been entrusted with the captaincy by McKenzie.

“I was captain for a little bit there but it was something that I never really chose to do because I just enjoyed playing the game. You knew that you were calling the shots out on the field at number 10 so I didn’t really think too far ahead.

“When I was given the opportunity here to me it’s just about representing your team and having to come and do the media stuff. Nothing changes on the field, you’re still the player, you’re still one of the boys in the change room, you’re no better than anyone else.

“Having a ‘c’ next to your name, is it going to change the way that I play? No,” said Cooper, who hailed the influence of James Horwill and Will Genia before adding: “Having the ‘c’ next to my name all you have to do is walk over and tell the ref you’re going to take the shot at goal or if you’re going to tap it, rather than someone else do it.”

Without Genia, a long-time half-back partner dating back to their regional age grade days together, to rein him in, the likelihood is that Cooper will tap and go more.

Was unfazed
As was the case when facing a battalion from the New Zealand media who had helped make the New Zealand-born outhalf Public Enemy Number One during the World Cup, Cooper was unfazed and humorous in facing the combined Australian and travelling media yesterday.

The night before he had called over to the Lions squad to pick up his old mate from Tokorua in Waikato, Sean Maitland, whom he calls his “cousin”, to have “a good yarn, catching up on old stories, when I beat him in a cross-country race”.

Rarely has one player constituted such a sizeable sub-plot to a game, not just because of his mercurial, game-breaking qualities; although his ability to take the ball to the line and put others into space with his rich array of passes or offloads out of the tackle means he “can do things that few other players in the world can do”, according to the retired Nathan Sharpe.

However, aside from iffy tackling which sees the Reds put him at fullback or even occasionally on the wing, Cooper has not always convinced with his regard to his game managment, when to run and when to play the percentages, most notably in that World Cup and in defeat to Ireland.

This, coupled with his self-imposed exile from the Wallabies last year amid claims of the “toxic” environment under Robbie Deans, has also made this game Cooper’s last audition for inclusion in the Wallabies’ squad as one of the six players still to be added to the mix.

But, asked if Deans had been in touch with Cooper to inform him what he needed to do, revealingly Cooper said: “No, not at all. For me it’s all about doing what I can for the team I’m involved in.”

Up in smoke
Last week, Cooper conceded two charged-down tries and at half-time his Wallabies hopes looked to have gone completely up in smoke. That may still be the case, but he has a mental strength to go with that strut.

“As soon as we sat down,” confirmed James Horwill, Cooper apologised for the charged-down tries, assured them all that his focus was fine, and that they would “get the job done in the second half”. Sure enough Cooper did, weaving over and stretching out for the match-winning try.

Yet the likelihood remains that even if he scores a hat-trick, lands 10 kicks out of 10 and performs a triple summersault back and forth over the crossbar he won’t be picked. The breakdown in trust between Deans and Cooper seems irreparable, and Cooper appeared resigned to that fate.

Yesterday he spoke repeatedly of looking no further than this game, of his privilege to be leading out his provincial team against opponents who visit once every dozen years, and even if he was resigned to his fate, with a hint of defiance, he took solace in having all the comforts of home.

“Of course, you never go out there not to make a team,” he said of his desire to play for the Wallabies. “You put out your best performances and if you’re chosen, you’re chosen. If you’re not, you’re not. You can never doubt the effort you put in. I don’t really concern myself with things I’m not involved in. Right now, I’m wearing the Queensland Reds uniform and have been all year. So, I’ll continue to do the best I can.”