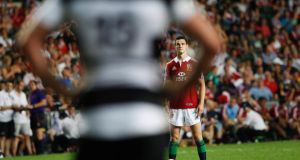 British and Irish Lions’ Johnny Sexton prepares to kick against the Barbarians during their friendly match in Hong Kong. Photograph: Tyrone Siu/Reuters

Lions 59 Barbarians 8: For all the misgivings, to have emerged seemingly unscathed from this preamble to the Oz Odyssey constituted a satisfying benchmark. A marker was putdown and one could understand Warren Gatland’s relative sense of satisfaction. “It was tougher than the scoreline suggested but it was a good run-out and exactly what I wanted,” he said

With impressive fitness levels and physicality, there was a Welsh/Wasps flavour to their hard-straight running and recycling akin to the Lions of four years ago. Having used the full width of the pitch in the first half, they had better joy in narrowing their game before going wide again, with the ploy of using their big ball-carrying wingers around the fringes evidently a clear tactic.

Cohesion and focus
The Lions were always likely to have more cohesion and focus than their patchwork, multinational opposition given the presence of nine Welshmen in the starting XV and their more intense preparations, and so it proved.

They had a good base, not least at scrum time, albeit there were no completed scrums in the first half. But the Lions had four full penalties and two indirect penalties, to two indirect penalties for the Barbarians. This contributed to a good night for the frontrowers and especially Mako Vunipola against a suffering Martin Castrogiovanni.

Paul O’Connell led from the front typically and having recently ended a barren four-year spell, plunged over for the tour’s first try. Toby Felatau carried reasonably well, looked big, strong and athletic, yet from this vantage point the outstanding Justin Tipuric looked the classiest act.

Aside from his strong defence, superb turnovers and general breakdown work and carrying, his awareness and footballing brain was in abundant evidence, never more so than when latching onto Sean Maitland’s chip ahead from a wonderfully worked counter-attack and linking with Owen Farrell. With the injury-enforced delays of Sam Warburton and Seán O’Brien, Tipuric has laid down quite a marker.

Two-try Mike Phillips won the Man of the Match, unquestionably for his running game, as some of his service was sluggish. Farrell had his handling errors too, though the humidity and perspiration made the ball akin to a bar of soap.

Skill levels
Viewed in that light, some of the Lions’ skill levels stood up well. Jamie Roberts and Jonathan Davies are not noted for their handling creativity. More they are the prototype for the modern-day midfielder and athletic Welshmen so beloved of Gatland, but they looked uber strong and also laid down markers. Two tries underlined Alex Cuthbert’s attacking potency and Stuart Hogg looked a real, heads-up footballer who was unlucky a couple of support runs didn’t yield a bigger dividend.

With George North’s employment as another crash-ball midfield option off the bench clearly something that had also been looked at in training, midfield is looking especially competitive, and especially outside centre given Roberts is the only specialist ‘12’. The frontrow and the halves were changed before the hour mark and the entire bench had been emptied by the 67th minute – the Baa-baas likewise a minute later. But from the point where the frontrow and half-backs joined the fray, the Lions tagged on five of their eight tries.

The Lions retention of possession – over 70 per cent – and the strain placed on the Barbarians’ defence saw the dominant team rewarded in the final quarter. Yet even allowing for the way the Barbarians wilted, the introduction of the bench was remarkably seamless, given most of them had only had limited training time with the rest of the squad since linking up with the squad prior to their departure from London last Monday. Even then, they were training separately for the most part.

Nor was this a purely parochial slant given those introduced included Cian Healy, Jamie Heaslip, Conor Murray and Jonny Sexton. Asked for his take on the performance, Rob Howley said, “I was really impressed with the bench. Most of them have only been with us for three or four sessions, particularly the Irish boys, and they had a huge influence. Admittedly the pace of the game had slowed down but the shape that we had didn’t change which augurs well for the next couple of weeks. Obviously Mike Phillips played well but equally Conor Murray when he came on, he was a running threat and created a lot of opportunities around the tackle area. So yeah, it bodes well.”

Porous fringe defence
While Phillips dipped his bread with some trademark bursts to expose a porous fringe defence – even Sergio Parisse virtually waved him through for his first of two tries – and came within inches of a hat-trick, likewise Murray’s running around the fringes played a big part in Alex Cuthbert’s brace.

The way Cuthbert and Murray celebrated, like long-time mates as well as team-mates, the second of the latter’s tries also highlighted how speedily the entire squad have bonded in the past week even though 14 of them missed the Vale of Glamorgan and Carton House camps.