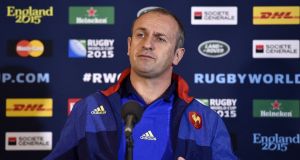 France’s rugby players are reported to have staged a “discreet” rebellion against their coach, Philippe Saint-André, less than 48 hours before Les Bleus face New Zealand in the Rugby World Cup quarter-final.

A report in L’Obs Sport newspaper on Thursday stated that there is “bedlam” in the squad after the players decided the former wing is no longer fit to lead them, with suggestions that senior members of the squad took over team selection for Sunday’s match against the All Blacks at the Millennium Stadium.

“A large majority of the team complains about the lack of charisma of PSA,” the paper quoted a source close to the players as saying. “They view him as a good guy, as a former great player but not as a leader of men. Some go for the match against the All Blacks with leaden feet, already beaten.”

The report also claims that the presence of former full-back Serge Blanco, who was brought in to assist Saint-André, had “destabilised the entire staff”, with the return of Morgan Parra to the starting lineup as scrum-half evidence that “the staff have decided to let the players be left on their own”.

Parra has been largely sidelined under Saint-André since the coach succeeded Marc Lièvremont in 2012 and is described as the “assistant to the sinking of an amorphous and melancholic team” by the report.

This is not the first time that France’s players have rebelled against a coach during the World Cup. Under Lièvremont in 2011, a group stage defeat to Tonga led players to stage an uprising, with No8 Imanol Harinordoquy admitting: “After the defeat against Tonga I did not attach too much importance to what Marc said. We had to free ourselves from his supervision.”

That did not end too badly as France saw off England in the quarter-finals before beating Wales on their way to the final, only losing to hosts New Zealand by a single point. Their football counterparts also performed a similar trick at the 2010 World Cup in South Africa, although the mutiny against manager Raymond Domenech could not prevent them from being knocked out in the group stages.

Saint-André, who spent time as Gloucester and Sale coach before his appointment, has already announced he will leave his post after the World Cup, with Guy Novès set to take over.