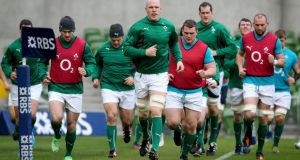 Ireland captain Paul O’Connell has been ruled out of the game against Scotland at the Aviva Stadium. Photograph: Dan Sheridan/Inpho

Dan Tuohy will now start alongside Devin Toner in the Ireland second row with Iain Henderson being called up to the replacements bench.

O’Connell is suffering from a chest infection and although he trained with the rest of the squad this week, coach Joe Schmidt has decided not to risk him for this afternoon’s game at the Aviva Stadium.

In the skipper’s absence, Jamie Heaslip will assume the leadership duties.

The loss of O’Connell is another blow to Schmidt, who has seen his preparations disrupted by a number of high profile withdrawals, not least the injury to Sean O’Brien.

Speaking earlier this week, Schmidt admitted Ireland will be hit hard by O’Brien’s Six Nations absence after shoulder surgery but the former Leinster boss challenged Ireland’s pack to pick up the slack and share O’Brien’s workload against Scotland in Dublin.

Chris Henry starts at openside, itching to frustrate Scotland at the breakdown, but will face a huge test to match O’Brien’s tireless ball-carrying exploits.

“Sean’s numbers were unbelievable both in defence and attack in the New Zealand defeat in November,” said Schmidt. “So it’s a real roll-your-sleeves-up day for the back row against Scotland on Sunday.

“Everyone has to take on that responsibility. As long as it’s shared, then that burden is lightened, rather than asking one person to pick up 10 of the carries Sean made, and someone else to make 10 more.

“He’s a big loss and it’s a huge opportunity for Chris Henry and the rest of the forward pack to take it on.”