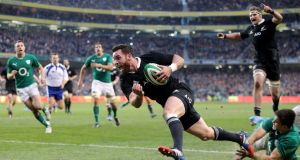 New Zealand’s Ryan Crotty crosses the line to score late in the autumn international against Ireland at the Aviva Stadium in November 2013. Photograph: James Crombie/Inpho

Paul O’Connell insists it is “brilliant scheduling” that Ireland must face the record-breaking All Blacks twice in three weeks.

Former captain O’Connell hailed Ireland bosses for arranging the punishing November schedule, adamant that facing the best on a regular basis is the only route to the top of Test rugby’s tree.

The All Blacks will gun for a 19th consecutive Test victory in the United States to extend their record winning sequence for a top-tier nation.

“I think it’s brilliant scheduling that Ireland will play the All Blacks twice this autumn,” said O’Connell.

“Clive Woodward was a big banker of his success with England on the fact that he chased down as many matches with southern hemisphere teams as he could.

“That England team repeatedly played the best in the world in autumn series, and it paid off with the World Cup for them in 2003.”

Eddie Jones’s Grand Slam-winning England team will not face the All Blacks until 2018, but despite Ireland’s hugely-demanding November, O’Connell has still backed head coach Schmidt’s approach.

O’Connell was on the field when Ireland squandered their best-ever chance for victory over New Zealand in Dublin in 2013.

Schmidt’s side were less than a minute from a historic victory when Ryan Crotty’s try and Aaron Cruden’s overtime conversion – landed at the second attempt – conjured New Zealand’s remarkable 24-22 win.

The current crop of All Blacks is already being hailed as the best Test team of all time, shaking off the post-World Cup retirement of five true greats without issue.

Cyprus hold the outright record for consecutive Test victories with 24 between 2008 and 2014, and All Blacks captain Kieran Read has already admitted New Zealand are still hungry to keep passing fresh milestones.

Despite all the odds falling New Zealand’s way O’Connell still believes Ireland could conjure victory in Chicago, but only with the performance of their lives.

“I think the only way for Ireland to keep improving is to keep testing themselves in this way, and so I think it’s fantastic to see them face New Zealand twice in three weeks,” said O’Connell.

“There’s no doubting it’s going to be tough for them of course, but that’s the challenge, and it’s how you meet it.

“Any team tactically that’s coached by Joe Schmidt will have a very good plan and it will be up to the players to execute that.

“We could play the perfect game, play to the best of our ability and we could still lose.

“So we just need to make sure we go after that. If we do that we’ll have a chance.”

1 Cheltenham faces criticism after racegoers suffer Covid-19 symptoms
2 Sport will be last duck in the row in return to normality after coronavirus
3 Andrew Conway diary: In search of a competitive edge
4 My favourite sporting moment: Shels finally make all the heartbreak worth it
5 Health official says decision to hold Liverpool-Atlético game was wrong
Real news has value SUBSCRIBE

Uefa say cancelling domestic leagues should be a ‘last resort’ 10:38
Sport will be the last duck in the row, Shelbourne’s triumphant return 07:54
Greener Pastures: Seinäjoki feels most like home for Tommy Dunne 06:30
‘Every team is in the same position – we all just want to play games’ 06:00
My favourite sporting moment: Shels finally make all the heartbreak worth it 07:27
Here is your handy guide to sport on television this week