Reaction from the Irish camp as Ireland beat England 19-9 in the Six Nations Championship. Paul O'Connell refleats on what will be his last time facing England in the Aviva Stadium. Video: Daniel O'Connor 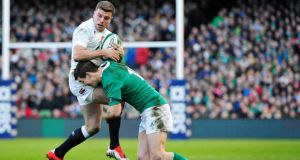 George Ford was given a masterclass by Johnny Sexton in England’s 19-9 defeat to Ireland on Sunday. (EPA/Aidan Crawley)

This morning, all around the country, people will be walking into work with beaming smiles on their faces - the afterglow of Ireland’s victory yesterday meaning even a commute through a blizzard (I’m still drying off) couldn’t dampen spirits.

But, there are two sides to every story. And for every happy Irish man, woman or child there’s probably a miserable hungover English rugby fan packed onto a tube like a sardine, cursing the boot of Johnny Sexton.

And how have the English media reacted to Ireland’s resounding win?

In The Guardian Robert Kitson writes Sunday’s win proves Ireland are a serious side capable of upsetting anybody in the world and it is hard to see anybody stopping Joe Schmidt’s side from securing a second successive Championship. He also feels it is difficult to see England lifting the World Cup on home soil after an afternoon marred by ill-discipline and a lack of composure.

Dean Ryan says Stuart Lancaster’s side never really managed to get going and ultimately were lucky to escape with just a 10 point defeat after they failed to cope with Ireland’s astute kicking game and barrage of aerial assaults.

At the heart of that kicking game was Johnny Sexton, who proved his standing as Europe’s best outhalf by delivering a masterclass to opposite number George Ford, according to Andy Bull.

The front page of The Daily Telegraph sport section describes England as being ‘Ill-disciplined, error-strewn, out-thought and outclassed.’

Mick Cleary says Sunday’s loss was a rude awakening for an England side buoyed by their opening round win over Wales and highlights how they are far from the finished article.

The theme that defeat has shown how unlikely World Cup victory is for Suart Lancaster’s men is a reoccurring one, and Paul Hayward believes England are an outside bet to lift the Webb Ellis Cup and no more.

Brian Moore believes the difference between the two sides was not as great as the score suggests, and that again it was England’s lack of discipline - not just in terms of fouls given - which cost them the game.

Again though he doesn’t think England are where they should be if they want to win the World Cup, whereas Ireland’s miserly defence and ability to execute a game plan precisely gives them a real chance.

The BBC’s Jeremy Guscott is another who feels Ireland are playing World Cup winning rugby, and their ability to keep things tight coupled with their lauded kicking game gives them a real chance - however a Welsh resurgence means they will start the Cardiff showdown as favourites.

1 Gerry Thornley: After 32 weeks the Six Nations is back up for grabs
2 Stockdale and Ringrose on board with expansive Irish game plan
3 Bennett girding his loins for impossibly unpredictable Vuelta
4 Allianz Football League permutations: Who needs what?
5 GAA expected to go ahead with championship under Level 5
Real news has value SUBSCRIBE

Different Strokes: ILGU conveyor belt churning out talent 06:30
Allianz Football League permutations: Who needs what? 06:00
Gerry Thornley: After 32 weeks the Six Nations is back up for grabs 06:00
Castrogiovanni remembers ‘beautiful battles’ with Ireland 05:15
Frank Lampard defends Chelsea’s rearguard ahead of Sevilla clash 05:00
Crossword Get access to over 6,000 interactive crosswords