Niamh Briggs nominated for IRB world player of the year 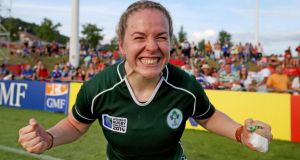 Ireland’s Niamh Briggs is among four nominees for the IRB women’s rugbyworld player of the year.

The full-back, who will be in action in the World Cup semi-final against England in Paris later today (5pm), is joined on the shortlist by two Canadians and Montpellier and France number eight Safi N’Diaye.

Briggs (29), of UL Bohemians and Munster, has cemented her place as one of rugby’s top performers in recent years and has been integral to Ireland’s push to the last four in France, the highlight of which has been victory over New Zealand.

“I would like to congratulate all four of these players who have made the shortlist,” IRB Chairman Bernard Lapasset said. “By making this exclusive list, they have already achieved something special regardless of who eventually wins the award.

“One of the features of a record-breaking Women’s Rugby World Cup 2014 has been the noticeable step forward in terms of quality. The level of skill, athleticism, pace and power has never been so high in the women’s game as it is right now and there have never before been so many competitive teams. It really is impossible to predict with any degree of certainty who will be lifting the trophy on Sunday and all this bodes well for the future of rugby.”

“I would like to take this opportunity to thank the teams for making this tournament such a spectacle and for putting in such hard work to ensure such a high standard of play.”