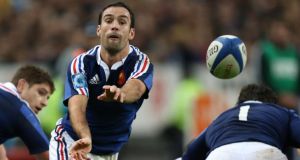 Clermont Auvergne scrumhalf Morgan Parra has been ruled out of next week’s Six Nations clash in Scotland after the French League (LNR) suspended him for two games following a red card for a headbutt on Rene Ranger in a Top 14 match against Montpellier.

He will though be eligible for selection for France’s final Six Nations game against Ireland at the Stade de France on Saturday week.

Parra, who has 54 caps but has not featured in the Six Nations this year, was included in France’s 30-man squad and expected to return at Murrayfield after first choice Jean-Marc Doussain’s poor performance in Friday’s 27-6 defeat in Wales.

“Morgan Parra is suspended for two consecutive matches on the grounds of ‘excitability’,” the LNR said in a statement.

He will serve the first match on Saturday when his club Clermont visit Bordeaux-Begles in the French league and the second the following weekend when France travel to Murrayfield.

His absence is another blow for France, who have suffered a string of injuries with flanker Yannick Nyanga and centre Wesley Fofana the latest to be sidelined.

France are tied on four points in the standings with holders Wales, England and Ireland after three matches. Scotland have two points after Saturday’s 21-20 win over bottom team Italy.