Mike Ford: Sam Burgess ‘didn’t have the stomach’ to fight for Bath future 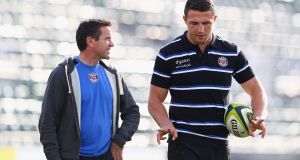 Bath coach Mike Ford believes Sam Burgess “didn’t have the stomach” to fight for his future at Bath after he decided to return to rugby league. Photograph: Michael Steele/Getty Images

Mike Ford believes Sam Burgess “didn’t have the stomach” to fight for his future at Bath.

The 26-year-old admitted his “heart just isn’t in it” on jetting back to Australia, leaving head coach Ford to reveal frustrations at failing to convince Burgess to stay on at Bath.

Ford insisted he laid bare just how much he felt Bath’s coaches and players had invested in Burgess, only for the ex-Bradford Bulls player to continue to chase a return to Sydney.

“All I know is that he didn’t have the stomach to see out his contract,” said Ford.

“For me this was the time to roll his sleeves up and become the player that I thought he could be – and he chose not to.

“You don’t know what he was thinking, it wasn’t until the final talk I had with him that I felt there was nothing more I could do.

“But I did speak to him about that and about what a fantastic player he could be, and about the investment the club and the players had made in him, and that it was time to repay that.

“But he chose differently.”

Burgess wrote in his Daily Mail column that he was “disappointed” to leave the Recreation Ground, but felt he was fighting a “losing battle” in union.

Despite featuring at centre for England, Burgess insisted he did not want to spend the next 18 months playing in the backrow at Bath only to miss out on Test selection.

Bath captain Stuart Hooper refused to allow Burgess to address the whole squad after he had opted to leave the club and head coach Ford defended that call.

“I think Sam asked to come back in on the Friday,” said Ford.

“We had a lot of distractions, we’d not started the season brilliantly, we had a really important game against London Irish and we just wanted to concentrate on the game.

“Stuart said to him ‘look we’ve got a day off on Monday, come back in and see the lads then’, that’s all it was.

“I told Stuart and the boys on Thursday morning, I think.

“Stuart got them together, formed a huddle and from there it seemed to be really tight, bonded them even further.

“Francois Louw’s a really good friend of his, he came back and spoke to the squad and again it was about saying ‘let’s move on, it’s about us now, let’s keep it tight’.”

Denton has been added to Bath’s European Champions Cup squad and will travel to Sunday’s clash in Toulon, but will not feature this weekend.

Ford insisted Bath will continue to seek further backrow recruits but believes his squad is now stronger as a result of trading Burgess for Denton.

“I think that is fair,” said Ford when asked if Denton’s arrival leaves Bath stronger this week than last.

“Everyone’s seen Sam’s interview and his heart’s not in it any more, so when someone’s like that you’re better off having someone in who wants to be here.

“I wasn’t surprised with what Sam said because he’s talked to me along the way.

“I knew and obviously I tried to say to him ‘you’ve got to stay here, see it out and roll your sleeves up’, but it didn’t happen.

“When I got him into the room on the Tuesday before we played Wasps and I’d given him 10 days off, that was the first time he indicated he was struggling.”

Expect a shake-up in the Ireland frontrow; Sonia O’Sullivan on the difference between running fast and racing 07:23
Joey Carbery set for Munster return against Cardiff on Friday 07:00
With 19 wins in a row, Man City’s aura has been restored 07:01
Japanese fans told not to cheer during Olympic torch relay 06:51
‘I just feel very sad at the moment’ – Gemma O'Connor reflects on 19 years with Cork 06:31
Crossword Get access to over 6,000 interactive crosswords