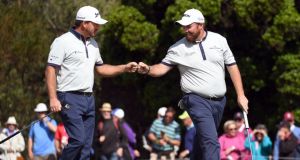 Graeme McDowell Shane Lowry made a solid start in the opening round of the World Cup of Golf in Melbourne. Photograph: Afp/Liam West

The Irish duo of Graeme McDowell and Shane Lowry sit three shots off leaders Spain after the opening day of the World Cup of Golf.

The tournament began with foursomes in Melbourne, and Lowry and McDowell made a solid if unspectacular start, making par on the first seven holes before a double bogey on eight was followed by a vital birdie on the ninth.

Birdies on 14 and 15 suggested a late surge was on the cards but a bogey on the 18th saw the pair settle for a level par 72 - which leaves them tied for seventh place along with Alex Noren and David Lingmerth of Sweden and Denmark’s Soren Kjeldsen Thornjorn Oleson.

Meanwhile Spain birdied the final hole to sit top of the leaderboard after the first round.

Rafael Cabrera-Bello and Jon Rahm went one under at the par-four 18th to card a three-under-par 69 in testing conditions in Melbourne.

It was a perfect end to an impressive round in the wind, with Cabrera-Bello having earlier sunk a putt from distance to register an eagle at the eighth.

“It was a fun putt,” he said. “When I was seeing it, it looked like it couldn’t miss and then all of a sudden it really missed and I don’t know how it came back and went in.

“It’s been a fun day. We played well. It was tough and tricky with the wind but Jon played great, I rolled some putts and hit some good shots as well. It’s a score we’re proud of and also a score we deserve.”

Rahm added: “We’re playing foursomes in this kind of weather in this part of the world and on this kind of course... It’s a little tricky to what I’m used to playing in the States.

“Obviously we planned a strategy which had me hitting more tee-shots. He hit a couple of great shots, rolled some putts in and that’s pretty much what we needed. It wasn’t so much about hitting great shots — it was about avoiding mistakes and we did that perfectly.”

Spain hold a one-shot lead over France, China and the United States, who all went round in 70 to be two under.

England, represented by Chris Wood and Andy Sullivan, were a shot further back on one under along with the Italian pair of Francesco Molinari and Matteo Manassero.