‘Magic man’ Brian O’Driscoll bows out on a high

‘I don’t want to take the jersey off to be honest, I’m tearing the arse out of it a bit’ 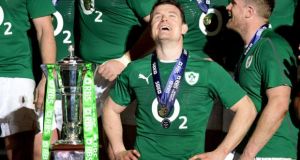 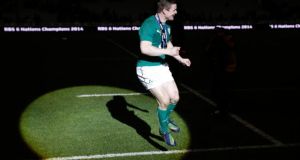 Ireland’s Brian O’Driscoll does a victory dance after winning the Six Nations title on his last outing in an Ireland jersey. Photograph: Yoann Valat/EPA

Brian O’Driscoll couldn’t help poking a bit of fun at himself as he sat among the media in the aftermath of Ireland’s famous win over France at the Stade de France in Paris tonight.

Still sporting his iconic number 13 jersey the departing hero of another Six Nations championship win admitted with a mischievous grin: “I don’t want to take the jersey off to be honest, I’m tearing the arse out of it a bit”

No one would begrudge him the indulgence following a wonderful career spanning 133 Tests with Ireland and eight with Lions.

Earlier, immediately after the 22-20 win saw Ireland climb back above England and take the silverware, the occasion briefly got to the greatest Irish player ever.

“There’ll probably be a few tears later on, there were a few tears when Joe Schmidt gave his last team talk and ... it was quite emotional,” he added as the interview was cut short on the threat of tears.

He regrouped and spoke later to BBC.

“It feels great to be a two-time Six Nations winner. It’s great to finish on a high in my last game in this magnificent jersey,” the 35-year-old centre told BBC1. “When I do hang it up on the hook inside, it’ll be with very fond memories.” “I’m absolutely delighted. There’s a huge Irish contingent here. I’m glad we gave them something to shout about.”

Ireland were left hanging on at the end and were grateful when Damien Chouly’s last-gasp try was cancelled out for a forward pass by Vincent Debaty to ensure O’Driscoll was given the fairytale ending with a second Six Nations crown.

Phew! Worked out ok! Thanks for all the messages of support. Unreal feeling. Not easy taking this off for last time pic.twitter.com/Sq89BdLOnw

Needing just a win to ensure their first Six Nations title since 2009, Ireland went 12-6 ahead after tries from Johnny Sexton and Andrew Trimble, although they trailed 13-12 at the break following Brice Dulin’s try, which was converted by Maxime Machenaud, who had earlier scored two penalties.

Ireland went ahead again following Sexton’s second try of the evening, but France narrowed the deficit to two points when hooker Dimitri Szarzewski bundled in.

Their nerves were tested when Chouly crossed late on, only for his effort to be chalked off to hand Ireland glory.

“It was last-leg stuff and I know now why I’m packing it in because 80 minutes is a long bloody time at international level, particularly with guys like Mathieu Bastereaud running at you — it’s no fun,” O’Driscoll added.

Victory sat uneasily with Paul O’Connell, who was typically displeased with the nervy finish.

“We stopped playing and stopped trying to win the game and that’s a dangerous game to play,” he said before paying tribute to his long-time ally O’Driscoll.

“It’s fantastic for Ireland and for the people back home. But also for Brian and his family. To be part of the team that laid the platform for him to have a great finish to his career is great for everyone involved.”

Ireland coach Joe Schmidt was shattered by the tension.

“Pretty worn out to be honest,” said the Kiwi when asked how he felt. “The fairytale continued to the end for the magic man (O’Driscoll).

“It’s unbearable. I’m not sure I can last too long doing this job. The heart nearly gave up. I thought across the match we deserved to win, three tries to two.

“As far as the tournament is concerned I don’t care how as long as we won.”

His opposite number Phillip Saint-André paid the highest of praise to O’Driscoll in his press conference afterwards.

“Next year Brian O’Driscoll will not be here and maybe we will have the God of rugby on our side.”