‘I thought they were brilliant in the execution, but if that’s rugby, I’m going to retire’ 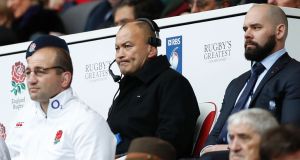 The Grand Slam champions trailed 10-5 at the end of the worst half of Jones’s reign, brought about by their inability to adapt to Italy’s crafty refusal to form rucks.

Jones insisted England had not played rugby, that paying spectators should ask for their money back and that he should refund his day’s wages to the Rugby Football Union.

The Australian threatened to retire if the tactics – which saw Italian defenders stand in England’s backline as no offside line had been formed – prevailed in future.

Jones said: “In football they say park the bus. I don’t know what they had, but it was bigger than a bus.

“Congratulations to Italy. I thought they were brilliant in the execution, but if that’s rugby, I’m going to retire. That’s not rugby.

“If your halfback can’t pass the ball, then there’s something wrong with the game. You’re looking to pass and all you see is one of their players.

“We lost the ruck from the game and when you lose a primary contest from the game it changes the game considerably and it ceases to become rugby.

“If you paid for your ticket, ask for your money back. I’ll have to give my money back to Ian Ritchie, because no one’s had rugby yet.

“I don’t want to be involved in those sort of games. I’d rather go home, pick up my stumps, put them in the kit bag and go home.

It took until the second half – after a talking to from Jones – for England to adjust and assert themselves.

Jones added: “Could we have adjusted even quicker? Possibly, but it’s difficult. The referee [Romain Poite] got flustered as well.

“I’m not critical of our side at all, because we didn’t play rugby.

“We probably got flustered a little bit by their tactics, which is normal.

Jones even suggested Italy scrumhalf Edoardo Gori – the most active exponent of the visitors’ tactics – should have been man of the match.

“We didn’t come up with this overnight,” the former Ireland fullback said.

“It is funny. When Wasps score a try to beat Toulouse in the European Cup and when David Pocock intercepts a ball against Ireland in the autumn internationals it is brilliant; when Italy do something it is not allowed.

“We beat South Africa and it is ‘a terrible South Africa side’; we do something different, ‘you can’t do that’.

“I am sick and tired of people having a pop and having a go.”

O’Shea believes even Jones, privately, would welcome the challenge the visitors posed, despite prior declarations he wanted a whitewash.

“Is that respect? I actually loved it when they kicked for goal as that was a bit of respect and I’m gutted that we finished the game off the way we did.

“Privately he [Jones] would be the first to say, ‘Thanks for giving us a challenge’.”

O’Shea credited former South Africa international Brendan Venter with coming up with the plan, which they informed Poite about on Saturday.

The idea came after Ireland benefited from a perceived offside a fortnight ago.

The French official informed the Azzurri of a change to the interpretation of the rule in the last week, which meant the scrumhalf could not be tackled.

O’Shea added: “I’m gutted the scoreline is what it is at the end of the game. A lot of thought has gone into it and we have a few other animals up our sleeves as well, not just the wolf – no, the fox.”

Asked if he believed Italy could have won the game, O’Shea added: “We weren’t a million miles away.”