Kurtley Beale: From outcast to the embodiment of Cheika’s Australia

‘He’s been outstanding on this trip, his consistency in training every day’ 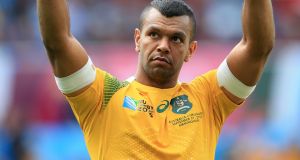 Kurtley Beale has come to embody Michael Cheika’s Wallabies revolution and has now been backed to typify Australia’s bid for future greatness.

Cheika inherited a mess of in-fighting and back-biting when Ewen McKenzie felt forced into resignation just a year ago.

Utility back Beale was an outcast when Cheika took the Wallabies helm, having been suspended following a bust-up with administrator Di Patston.

Former Leinster boss Cheika quickly jettisoned all that baggage however and brought Beale in from the cold for last year’s November Tests.

“He’s been outstanding on this trip, his consistency in training every day,” said Cheika of Beale, after Australia’s 34-17 World Cup final defeat to New Zealand.

“He’s probably been one of our best, but he’s had to mix it up between starting and being on the bench.”

Beale was a constant scourge for the All Blacks after joining the fray as a replacement in Saturday’s World Cup final at Twickenham.

Though Australia ended up well beaten the Wallabies rallied from 21-3 down to within four points before the All Blacks raced away again.

Despite the defeat the Wallabies have turned several dismal years on their head in fine style at the World Cup, with Cheika now plotting a more measured course ahead.

Cheika is just as keen to leave the controversy in the past as Beale, and the Wallabies boss has tipped the talented 26-year-old to reach his peak in the next few years.

“His attitude towards selection and all those things, then coming on and making a contribution, he’s been outstanding for us,” said Cheika.

“I like him a lot as a player, I’ve had a lot to do with him and he’s only going to get better from here.”

“I’m really close with Kurtley, he’s a real close mate of mine and I’m so proud of the way he’s played throughout the whole tournament,” said Folau.

“He brought great energy off the bench, and all credit to him, and that’s the type of player he is.

“I’m just proud to be playing alongside him.”

No-nonsense coach Cheika’s homespun approach was an instant hit on his Wallabies arrival, and since then the 48-year-old has won global acclaim for it.

The former Leinster boss throws his weight around in full-contact training.

He has spent time boxing with Quade Cooper to toughen up the playmaker — and used to have his Leinster players “scared s***less”, according to Johnny Sexton.

Scrum-half Nick Phipps admitted Cheika has spent countless hours helping the Wallabies players get the very best out of themselves.

“The three main things for us have been making the right decisions, fulfilling our potential and never letting anyone down,” said Phipps.

“That’s shown in the way the coaches have developed the squad.

“You can see Kurtley Beale performing like that, the group that’s around, he’s a class player.

“I wouldn’t say Cheik’s got any secrets, he’s very up front in what he wants to do.

“It’s great that a lot of people out there can see him and the passion he has to reinstate Australian rugby where it belongs.

“That feeds right through the group.”