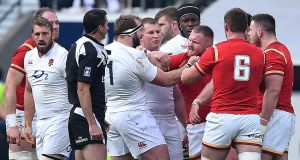 England prop Joe Marler must wait a fourth day to discover if his verbal abuse of Wales’ Samson Lee is to result in any punishment.

Six Nations organisers announced there will be no verdict on the incident that occurred during the 25-21 victory at Twickenham until after Marler’s citing for striking has been heard on Wednesday afternoon.

“Mr Marler is the subject of a citing complaint which is being heard on Wednesday,” a Six Nations statement read.

“In fairness to all concerned we do not propose to make any comment on that or any other incident involving Mr Marler until after that hearing.”

The delay in publishing the findings into the incident during which Marler called Lee “gypsy boy” comes despite the Harlequins loosehead having apologised to his rival at half-time for the insult.

England have censured the player and reminded him of his conduct, seemingly clearing the Six Nations to apply any sanction they deem suitable under the law of verbal abuse of a player based on religion, race, colour, national or ethnic origin, sexual orientation or otherwise. The entry-point punishment for the offence is four weeks.

However, no update will be given until after Marler’s hearing for striking prop Rob Evans with his forearm — an act also committed in the first half of a thrilling Twickenham showdown — has been heard in London.

The entry-point sanction for striking is two weeks and a verdict is expected late on Wednesday afternoon.

England publicly insist they are preparing for Saturday’s climatic trip to the Stade de France as though their first-choice loosehead is available, but in private they must resigned to seeing him ruled out.

Mako Vunipola is poised to start in Marler’s place for the newly-crowned Six Nations champions should the likely the scenario unfold, with Matt Mullan offering cover on the bench.

Head coach Eddie Jones condemns the abuse, but highlights the 25-year-old’s apology to Lee at half-time as evidence of his remorse.

“It’s not in the spirit of the game. Joe understands that and that’s why he apologised straight away. People make mistakes, we all make mistakes,” Jones said.

“The fact that he apologised at half-time is a real testament to Joe’s character.

“You don’t apologise at half-time in a game of rugby unless you mean it. He’s been apologetic about it and wants to get on with it.

“There’s a judicial process in place so we’ll let that run its course. At the moment Joe is available and he will be available until the judiciary says he’s not.”