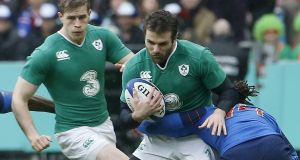 Jared Payne has signed a new two-year Irish contract that will keep him at Ulster until June 2018 at the earliest.

The 30-year-old has been a key operator in the Ulster backline since moving to Belfast in September 2011, making 63 appearances and scoring 14 tries.

After serving his three-year residency, the New Zealand-born player won his first international cap in the November international against South Africa in 2014. He has earned 12 caps and scored two tries to date, forming a new midfield partnership at international level with Robbie Henshaw.

Commenting on his new contract, Payne said: “I am very happy to have signed a two-year Irish contract to remain with Ulster Rugby. It has been an honour for me to not only pull on the Ulster jersey, but to represent Ireland as well. There is plenty for us to achieve at Ulster and with Ireland.”

Ulster’s director of rugby, Les Kiss, added: “Jared is an incredibly astute and intelligent rugby player. He adds experience and calm to any backline and he will continue to be an important player for Ulster in the years to come.”

IRFU performance director David Nucifora commented: “Jared has illustrated his ability to compete at the highest level and be an important leader and decision maker for both Ireland and Ulster. We are delighted to have secured his services for a further two years.”