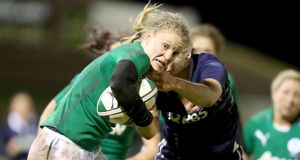 Claire Molloy: “This game, England in a world cup semi-final, this is our dream. We now know we can beat New Zealand, so why not England as well?” Photograph: Dan Sheridan/INPHO

It would be Claire Molloy who caught hypothermia. You might have seen the picture. A bitterly cold, wet and windy day in a town called Parabiagio, a ripped off taxi fare outside Milan, was where it all went down.

It was St Patrick’s Day last year as Ireland scrambled to the Grand Slam thanks to the boot of Niamh Briggs but it was the work of their number seven that played such a pivotal role in the success.

As has been the case for some time now. Molloy was named Irish player of the year in 2012 and only pipped at the post by Briggs in 2013.

Anyway, she was whisked off to hospital that evening, essentially to be re-heated (in a typical sign of the lack of professionalism of those on the periphery of women’s rugby, someone forgot to turn on the hot water in Parabiagio so the showers became a torture chamber).

Thankfully she survived. Like so many of the ladies in this ground-breaking world cup squad, her origins are Gaelic football - she played corner back in Galway’s 2005 All-Ireland final defeat to Cork - but Molloy is a natural born openside.

Ignore the run of play in tomorrow’s World Cup semi-final against England and track the 26-year-old doctor. You will still be following the run of play.

One guess who she models herself on?

“Richie McCaw. I remember getting feedback from Lenny (Browne, Ireland’s video analyst) and he showed me McCaw. He is always on the second defensive line, always ready to pounce.”

Of the Irish forwards only Fiona Coghlan and Ailis Egan have banked more game time over the three Pool matches in Marcoussis. And that’s because she was caught doing her job – not medicine, thievery.

“I had a 10 minute break against the USA and the girls have reminded me about it. Not under your posts!”

The sin-binning in the 23-17 win over America could have proved costly. But she was only doing what makes her such an effective player.

“It was over eagerness to get the ball. I accept I was wrong.”

There is an argument to say someone else was wrong?

Her 68kg frame seemed too light to cope with the Black Ferns. They were exected to neutralise her effectiveness at the breakdown. But during the Six Nations the English backrow couldn’t remove her from the tackle area at Twickenham nor could the gargantuan French down in Pau. She was also a valuable linout option at the tail against New Zealand. And she carried an enormous amount of ball (as she did when coming on against Kazakhstan). And she spoiled and slowed, spoiled and slowed.

“McCaw’s timing is immaculate. Slowing the ball is as important as a turnover. In many cases more important as it allows us to keep our defensive shape.”

This intelligent woman lives among the enemy nowadays. Having studied medicine at Cardiff University, she plays with Bristol and until recently Marlie Packer.

“We played ‘sides’ but she always got the seven shirt. She is so dangerous in the loose, a real nuisance at the breakdown and we thrived being at the same club. Training at the breakdown was great craic but Marlie wasn’t even in the England 22 against Canada. That’s how strong they are.”

That’s because of the world’s best player.

“Yeah, they have Maggie ‘The Machine’ Alphonsi. She is the face of women’s rugby, a poll recently rated her 20th most influential player in the sport. Both men and women. She’s an icon.

“But that’s off the pitch. With our backrow we know we are a force to be reckoned with.”

Fleming’s reaction to being dropped was to race 70 metres for a try against Kazakhstan. Another flanker, Sharon Lynch also got on the end of the flowing attack last Saturday.

It keeps England guessing about who will wear numbers six and eight.

Packer may yet come into close quarter contact with Molloy tomorrow evening, as she was the winning try scorer off the bench last February. That was a grim night for Irish rugby in general. English power prevailed but Ireland lost Niamh Briggs, Jenny Murphy and their brilliant lock Sophie Spence before the hour mark. Such was the punishment, even Fiona Coghlan came ashore early.

Of course Molloy finished the game despite shipping the heaviest blows. She remembers how it all went astray after seven minutes when Sharon Hunter walked the English scrum over Ireland’s line.

“That try was down to miscommunication on our part. Someone, not one of our girls, made a call and our backrow disengaged, leaving the front five alone against the English who kept scrimmaging.”

An England player made the call?

“Yeah, probably, but I have no problem with that. That won’t happen again.

“Looking at then and now, we have become a more creative team and are far cuter on the pitch.

“We are a more intelligent team now. We have more guns in our artillery.

“This game, England in a world cup semi-final, this is our dream. We now know we can beat New Zealand so why not England as well?”

Whether that happens or not Molloy’s name should be on the short-list for IRB player of the tournament. As surely will Niamh Briggs.