Ahead of Ireland's rematch against New Zealand, fullback Simon Zebo talks about room for improvement and preparing for a backlash from the All Blacks. 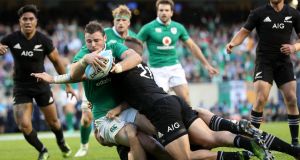 It doesn’t get any easier, does it? True, Ireland may have removed the biggest monkey from their backs this country has ever known, and already some of the mystique attached to the almighty, all-conquering All Blacks has also been eroded. After the Green Army of travelling fans, ex-pats and the wider diaspora made Soldier Field into a glorified home match, we’re now back at Lansdowne Road, with an ideal Saturday tea-time kick-off.

Since the full-time whistle two weeks ago, there is the distinct impression that the Aviva could have been sold a couple of times over. The presence of the All Blacks, and the pre-match pageantry, will also ensure the stands are properly heaving well before the kick-off.

Of the victorious Irish starting XV, all bar Seán O’Brien, who needed another hour on his road back to his best, have been rested. The mood music will have been enhanced by the handsome win over Canada with eight new caps. Joe Schmidt will have ensured little or no backslapping in the wake of Chicago. Only the flaws and malfunctions will have been chewed over in the intervening two weeks. Ireland, fit, confident and well prepared, are in a very good place.

But if they are in a different place mentally, then so are the All Blacks, all the more so given yesterday marked the first anniversary of Jonah Lomu’s death.

So as hard as it was to beat the All Blacks once after 111 years and 29 attempts, it stands to reason that beating them again a second time just two weeks later will be an even bigger ask.

Only 11 times in history has a side beaten the All Blacks back to back in the same season, and it has only happened once since 1998, when the Springboks, then in their pomp, beat the All Blacks three times in 2009. Hence, if it was the ultimate test two weeks ago, then having poked the bear it’s just been replaced by a tougher test. “I think it absolutely is,” agrees Schmidt. “I don’t think you could get a tougher test because I think that they are unhappy, obviously.

“When you win 18 in a row and you get into that habit, you’re not happy to lose that. I know they were quite outspoken about being driven to continue that through to the end of the calendar year and that hasn’t happened for them, so they want to get straight back on track.

“With the talent they have, it’s going to be incredibly tough to stop them doing that. We’ve tried to internalise a couple of lessons that we learned in Chicago and we’ve stayed pretty much focused on ourselves and what we can try to manage.

“Obviously, with an awareness of the quality of some of the players they’re bringing in that didn’t play us last time. The secondrows, but also Israel Dagg, Anton Lienert-Brown – those guys are new to the group after Chicago.”

At a stroke, the return of their first-choice lock pairing of Brodie Retallick and Sam Whitelock ought not only to sharpen their lineout to its customary slick standards, but improve their scrum and play around the pitch.

It’s doubtful, therefore, that Ireland will pilfer three throws again, as they did in Chicago, nor that the penalty count will be 12-4 in Ireland’s favour. This contributed to Ireland equalling the entire tally of five tries which the All Blacks conceded in six Rugby Championship games.

Ireland’s first try emanated from successive penalties and lineout mauls. The source of the second was also another penalty to the corner and a lineout drive which the All Blacks held up before Ireland went wide – both against 14 men.

The field position for the third try was initiated by a Dane Coles overthrow. The fourth also emanated from another long penalty to the corner by Johnny Sexton and, after another lineout drive, he put Simon Zebo over in the blindside corner. Even the fifth try emanated from a long-range attack off a lineout and then another rock-solid scrum.

The All Blacks stole two Ireland lineouts, one of which led to one of their four tries, and with Retallick and Whitelock back, they will be even more competitive on the Irish throw.

Ireland are unlikely to be given as much of a helping hand by the All Blacks’ ill-discipline again. Steve Hansen reckons all 12 penalties his team conceded were avoidable. “You expect to get a couple but 12 out of 12, you’re on the money when you’re having an off-day and you have 12 out of 12. They want to kick into the corners, they want driving mauls – I think they scored two tries out of that – so you’re giving them what they want. You’ve got to try to avoid that.”

Nor are the All Blacks likely to be as error-prone. “When you make 16 unforced errors out of 21, that’s something you’ve got to fix,” notes Hansen.

Of course, Ireland are good enough to launch moves off their lineout again, and to find other access points into the match, all the more so given the Schmidt factor and the presence of Conor Murray and Sexton. And if they’ve learned one lesson from the last two meetings, it is that they have to keep taking the game to the All Blacks, keep looking to score tries.

Kicks to the corner

Thus we can expect Rory Best to again opt for kicks to the corner. O’Brien’s return alone ought to add to their ball-carrying game and breakdown work, while easing the load on CJ Stander, who had a phenomenal amount of carries and tackles in Chicago, and Ireland may well have to tackle more this time around.

Ireland won the aerial game in Chicago, but by retaining faith in Aaron Smith, it looks as if the All Blacks will resort to more of a kicking game. And by selecting Dagg, they are also better able to cope with Murray’s box-kicking and Sexton’s kicking game.

No two games are the same, least of all when the same sides meet again, but while conditions were perfect in Chicago, the forecast is not too inclement and there is not that much scope for something radically different.

It has all the makings of another fluid, fluctuating rollercoaster ride.