Ireland U-20s blown away in the first quarter 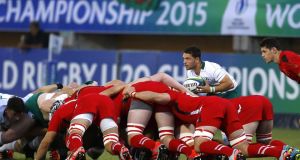 Ireland scrumhalf Charlie Rock scored a late try but it was too little too late for Ireland at the Zaffanella Stadium. Photograph: Inpho

This is what Ireland feared might happen against New Zealand but few expected them to be 19-0 down after just 15 minutes of this World Rugby U-20 Championship match in Viadana.

But Ireland were left with a near impossible task as Wales showed a ruthlessness that they could not cope with as they got on top from the outset.

Their 19-12 loss in Wales in the Six Nations did little to suggest that they would be turned over so easily in this fifth place play-off match, but they suffered one hammer blow after another at Stadio Zaffanella

Ireland needed a solid start but they were on the back foot from the start as Wales ruthlessly punished them from the outset.

The net result is that Ireland will return to Viadana on Saturday to battle it out with Scotland for seventh place, while all the positions in the top half of the competition, including the final, will take place in Cremona.

A break off a midfield scrum created the opening for Wales as Ireland struggled to get tackles in and full-back Dafydd Howells, who made his senior debut against Japan last year and clocked up 11 appearances for the Ospreys during the season, raced through to score.

The Irish response was good and it looked like they cancelled the score but Ciaran Gaffney was deprived short of the line by try-scorer Howells.

Wales, on the other hand, made every chance count and No.8 Harrison Keddie showed good hands down the left to feed outside him where Seb Davies made the overlap count, with Jarrod Evans converting to make it 12-0 after just nine minutes.

Ireland were struggling in their set-piece and regular knock-ons undid a lot of hard work, and they were left with a mountain to climb when Wales made it 19-0 after just 15 minutes.

Ireland captain Josh Murphy seemed to be obstructed in midfield but Wales made the opportunity count and left winger Joshua Adams scored down the left after being put through by Howells.

Moments earlier, Ireland had a chance to get off the mark but Joey Carbery was unable to land the penalty from 35 metres on the right wing.

Ireland finally managed to string some phases together and laid siege on the Welsh but while their flanker Tom Phillips was binned as they desperately defended their line, Ireland could not get over.

Ireland had plenty of possession but were to unable to reduce the deficit while they had an extra man and their form was epitomised when David O’Connor knocked on in the tackle just as he was about to go over.

Ireland were given some hope after the restart when Sam Arnold broke from deep and while Nick Timoney was caught by Howells in the left corner, Ireland recycled well and Ringrose sent Gaffney over in the right corner.

Carbery added the points and Ireland were given further hope when Welsh captain Ollie Griffiths was binned for a high tackle on Carbery towards the end of the third quarter.

Ireland managed to put pressure on the Welsh set-piece and they were rewarded with a try off a scrum into the final quarter, with scrum-half Charlie Rock getting the touchdown to reduce the margin to 22-12.

Wales rarely got out of their own half but poor handling did little to help the Irish cause and give real momentum to the comeback, but the real damage was done in the opening minutes.

Manchester City’s Kevin De Bruyne ruled out for up to six weeks 14:33
Angelo Mathews stands up to England attack as Sri Lanka hold firm 13:09
Conor McGregor feels like he’s ‘only starting’ in UFC career 13:02
TG4 to show matches and highlights from AFLW 12:40
Garry Ringrose returns as Leinster and Munster name teams 12:24
Crossword Get access to over 6,000 interactive crosswords