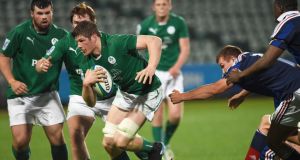 Ireland’s Jack O’Donoghue will be hoping to lead the team into the semi-finals. Photograph: Andrew Cornaga/Inpho

Ireland coach Mike Ruddock has made four changes to the Ireland team for their World Under-20 Championship Pool defining game against Fiji at the QBE stadium, Auckland tomorrow morning (2.35am, Irish time, live on TG4).

The remit is simple. If Ireland win with a four-try bonus point they will qualify for the semi-finals of the tournament for the first time since 2004, when they were beaten in a final - it was and Under-21 tournament at the time - by New Zealand in Glasgow.

There are other mathematical permutations by which Ireland can reach a semi-final but the easiest and most obvious is by the aforementioned route.

Cork Constitution’s Ryan Foley comes in as scrum half for his first start of the tournament. Stephen Gardiner (Lansdonwe) is named in the secondrow, while Josh Murphy (UCD) and Rory Moloney (Cuccaneers) have been named in the back row alongside captain, Jack O’Donoghue.

England and South Africa have already qualified for the semi-finals as pool winners. Six Nations champions France must beat Wales to top Ireland’s group while hosts New Zealand and Australia will be relying on Fiji to do them a favour against Ireland.

The Irish Times will publish a match report on the website soon after the game finishes in the early hours of tomorrow morning.