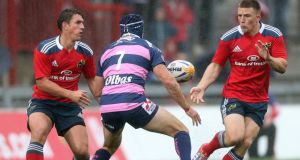 Andrew Conway (right) scored three tries in the first half of the game against Russia, while Ian Keatley (left) scored a try and kicked five conversions. Photograph: James Crombie/Inpho

Emerging Ireland 66 Russia 0 (Match abandoned, Ireland awarded points): The thunder and lightning provided a welcome relief from this non-event in Bucharest today when, after 45 minutes, Welsh referee Ian Davies immediately called a halt to the procession for “player safety reasons”.

With the storm showing no sign of abating, it was agreed by all parties to abandon the game. Ireland were awarded the tournament points.

This never resembled anything like a test match as Dan McFarland’s side strolled, literally at times, to a 10-try victory in the opening Nations Cup tie at Stadionul National Arcul de Triumf.

Russia’s problem was tackling, or an embarrassing ineptitude in this regard, with Andrew Conway streaking clear for three of Ireland’s eight first-half tries.

But this was a pointless exercise, the Russians desperately poor in all areas.

The second half was ambling along at the same pedestrian, one-way pace with another Gilroy try and Hanrahan’s conversion pushing Ireland out to 66-0.

Then came a flash of lightning followed by thunder and driving rain on Friday the 13th no less, and it’s also a full moon, so understandably the players and officials headed for shelter.

Ireland’s next match is against Uruguay next Wednesday with summer holidays coming after facing Romania on Sunday week.