Ireland’s swashbuckling under-20s turn it on against France 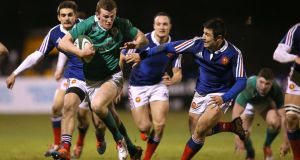 Swashbuckling back play, a robust carrying game around the fringes and tremendous character in defence were the primary constituents of a superb victory for Nigel Carolan’s young Ireland team. All teams require a dollop of good fortune and the home side got that as France butchered a couple of chances but Ireland deserved a rub here and there.

There was so much to admire in a victory over last year’s Grand Slam champions, not least because the homeside were forced to scrap and scramble, at times overpowered in the scrum, on other occasions, forced to haul down a fleet-footed Frenchman by grabbing a couple of millimetres of jersey.

Even when under the cosh they never lost the self belief in the patterns they wanted to play, eschewing conservatism - there were times when a judicious kick would have been a better option - in favour of utilising the full width of the pitch. It was a joy to watch.

Ross Byrne was named man of the match, recognition of his outstanding performance, in all aspects of the game but others like Zack McCall, Lorcan Dow, Garry Ringrose, Stephen Fitzgerald, captain, Nick McCarthy and an exceptional display from teenager Sam Arnold stood out; everyone contributed handsomely.

Both sides intelligently varied the point of attack in the opening 40 minutes, each especially keen to try and get around the opposing defensive line. Ireland started and finished the half with two gorgeous tries, both of which were executed with training ground precision, albeit in a more intense environment.

The first after six minutes was down to Byrne’s beautifully timed pass, Arnold’s ability to ride a tackle and get his hands free and his offload to the supporting Jack Owens, running a trail line having come in from the blindside wing.

The second on 36 minutes again involved Arnold, this time the 18-year-old Ulster centre flashed a no-look inside pass to left wing Stephen Fitzgerald. The Munster academy product still had plenty to do but the angle he chose and the exceptional acceleration took him through and then round the covering French defence.

Byrne, imperious in all aspects of the game, kicked both conversions and added two penalties. France’s response was a spectacular solo effort from blindside flanker Sekou Macalu, who demonstrated footwork and serious pace; Ireland though will be disappointed with the defending, undone by some brittle attempted tackles.

Fullback Thomas Romas kicked the conversion and a penalty. The visitors spurned a couple of gilt-embossed try scoring chances, Arthur Bonneval missing a fly-hack with the line at his mercy and captain Lucas Bachelier knocked-on a couple of metres out.

Ireland grabbed their third try three minutes after the resumption, the direct driving of the pack complemented by Byrne’s wonderful sleight-of-hand with a double dummy that bamboozled the French midfield, put fullback Billy Dardis through a gap and the UCD student scampered the eight metres to the line.

It was another homily to the training ground in selecting the right play and executing. At 27-10, the home side had a commanding lead but to their credit, the French, as they had done in the first half set about closing the gap on the scoreboard.

Tighthead prop Michael Simutoga forced his way over after the visitors had driven a lineout maul to the Irish line, Romas added the conversion and then tagged on a penalty, so by the 57th minute the French trailed by just a single score at 27-20. They continued to press but Ireland’s scramble defence, just about managed to stifle the blue waves that swept across the Dubarry surface.

Replacement wing Valentin Saurs should have looked outside from one such sweeping attack as he had men to spare but instead took contact and was stripped by Ringrose. Despite absorbing huge pressure Ireland’s resolve never failed, nor did their willingness to keep playing rugby.

A smart break from McCarthy allowed the forwards some go forward ball and they eventually forced the visitors to concede a penalty for an offence at a ruck. Byrne was unerring once again to nudge his side into a 30-20 lead. On 78 minutes Ireland embellished their performance with a fourth try. Ringrose read Elliot Roudil’s pass just inside Ireland’s 10 metre line, intercepted and then, roared on by an exultant home support, outstripped his pursuers over 55 metres. Byrne made it a magnificent seven from as many opportunities on the night with the placed ball to cap a brilliant individual, and for the most part collective, performance.