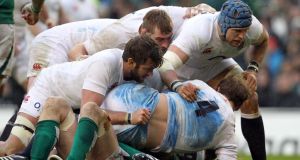 The English pack clear a ruck against Ireland during last year’s Six Nations clash. “Ireland will need to dominate the English pack with their mauling which was simply glorious against Wales.” Photograph: Colm O’Neill/Inpho

Winning at Twickenham, deep within the belly of the English beast, is an exceptionally difficult mission.

Stuart Lancaster has jettisoned the “rock stars” that represented England so poorly at the 2011 RWC.

The players Lancaster has selected to replace them are perhaps less gifted, but they all have the mindset that is prepared to pay the price, no matter how high, for victory.

England are not flamboyant or overly creative. While Australians joke that England’s only William Webb Ellis Cup win, was on the back of a drop goal, what is not mentioned is that Johnny Wilkinson’s World Cup-winning kick, was set up by hard-grinding, technically brilliant, aggressive, direct rugby.

A trench warfare style of rugby is hard wired into the English DNA.

This English team is much less talented than those under Clive Woodward’s stewardship. Stuart Lancaster understands his team’s abilities and limitations. All good coaches are realists and Lancaster is both a fine coach and a realist. His men are equal to any team on the planet in terms gritty determination. Like the old “Iron Lady” herself, they are not for turning.

While the English are not overly talented, they are confrontational and full of belief. They play attacking systems that their collective talents can execute. The systems are uncomplicated yet highly effective. There is no Carlos Spencer or Barry John, to produce a radical play.

With the possible exception of Mike Brown at fullback, the English lack a running player with a cutting edge.

To cover this weakness the English attacking system uses a host of runners off Farrell. He rarely uses them. Rather, he passes behind them to the deeper “second man play”.

England then look to move the ball wide, where they have backrowers and a reinvented Courtney Lawes, running in the channel.

England are hugely aggressive at the tackle contest on their own ball. Their aim is to create multi-phase attack. This constant recycling builds pressure against the defence. Lancaster hopes this will make up for his lack of a true game-breaker and the pressure will crack the defence.

In the opening rounds of the championship, Ireland have been technically excellent and abrasive at the breakdown.

The tackle contest is the place to attack England and unhinge their attacking game plan. Here Peter O’Mahony has been a revelation. Brave beyond words and technically perfect, his courage and fight has been an inspiration.

To defeat England, Ireland must deny them the battle they want. Ireland must take the fight to where the men in white want it least. Ireland must give them a fight on territory England are uncomfortable with.

Ireland must attack the English set-piece with venom.

The Ireland scrum has been superb. The eight need to attack the English at their heart. David Wilson needs to be given the test of his life. It is a challenge, but the rewards will be massive.

While the Welsh and Scottish lineouts performed poorly, much of that was due to Irish pressure.

The agility of the Irish forwards and their ability to read the triggers and decoys of the opposition lineout was of the highest order.

Ireland will need to dominate the English pack with their mauling which was simply glorious against Wales.

To see a “bound mass” of Irish bodies, driving relentlessly towards the Welsh try line, all the while tearing asunder their opponents’ spirit and will, remains a sight that is both primeval and magnificent.

I am not ashamed to say I was yelling with joy at my TV.

After nullifying England at the breakdown and the lineout, Ireland must then dare to attack. Here the more talented Irish backs need to step up.

England implemented a rushing defence that was full of exceptionally large holes. England are taking the space from the attacking team, but they have been guilty of moving as individuals and not as a line.

Ireland need to use their footwork, ignite their offloading game and attack the spaces around the rushing defenders. The French identified these weaknesses and outhalf Jules Plisson used an accurate grubber kick behind the English defence for Yoann Huget to chase and score in the opening seconds.

I hope to see Johnny Sexton punch the ball in behind the rushing English line with a strong chase from the three-quarter line.

A French team, with more individual brilliance than England, found the paths through a rushing defence, to produce three spectacular tries and deny England. Those same spaces will be there for Ireland.

To win at Twickenham, Ireland must be more aggressive than the aggressive English. Be more precise than an English team that prides itself on precision.

Ireland must dare to run the ball and offload to support against a rushing English defence. So there is the theory of the game plan. That is the easy part.

The hard part is to go the capital of the once mighty British Empire and walk into the heart of its great amphitheatre. View the symbols of power, designed to intimidate the visitors. Hear the anthems and accept the taunts.

Then to perform like you have never performed before in your life, and overcome 23 unified, tough, determined English men, who are inspired by their own nation.

That is the hard part.

This match will be as tough as they come.

A win today will rightly place Ireland in the box seat for a Grand Slam.

Ireland are good enough to keep the dream alive but, like all things that are worthwhile in life, it will not be easy.