27 injured or suspended over course of Six Nations campaign 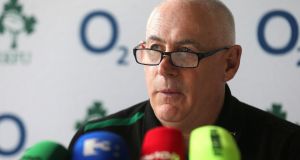 The list of 27 Irish players, injured or suspended, over the Six Nations campaign yesterday prompted Ireland manager Mick Kearney to borrow a well-known acronym. “The injury thing has been absolutely extraordinary,” said Kearney.

“It reminded me a little bit of Charles Haughey ’s famous quote about Gubu: grotesque, unbelievable, bizarre and unprecedented.“The majority have been soft tissue. It’s been unfortunate and unlucky. There is no actual trend to it that you would look and say we are doing something wrong.”

The most horrific of them all befell Eoin Redden last Saturday, when the scrumhalf suffered a fractured fibula and ankle ligament damage, which required surgery yesterday. His estimated recovery period is 12 to 16 weeks. Fergus McFadden sustained a fractured rib and could return anywhere between three to six weeks.

Brian O’Driscoll this season has suffered concussion, ligament damage to both ankles, eight stitches to an ear laceration, a head wound that required nine stitches and a dead leg. The 34-year-old is aiming to recover from concussion before Saturday’s game in Rome. “He’ll be monitored but it’s too early to say whether he will be available for the weekend,” said Kearney.