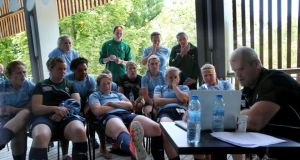 Enda McNulty, Irish rugby’s motivational guru, will not be pleased by this World Cup portrait starting with a splash of negative hue. It’s those dark green jerseys. They look worryingly like the male version from 2007; the last major rugby tournament held in France.

The one none of us will be forgetting any time soon.

But that’s the least of Ireland’s concerns ahead of this evening’s Pool B opener against the fifth-ranked USA in Marcoussis. Ireland are seventh in the IRB pecking order, while Tuesday’s opponents New Zealand are the world’s best side.

Throw Kazakhstan into the mix and they have themselves a group, not so much of death, but where everything must go according to Philip Doyle’s master plan.

The American game takes place on Pitch 3 of the French Federation headquarters, just a few paces from where Fiona Coghlan’s gang have been training, eating and sleeping this past week (alongside neighbours France, Spain and Canada).

At least they want for nothing.

“It was a nice way to finish the prep last weekend as Joe Schmidt and Les Kiss came in for a session,” said Doyle.

“Joe worked with Greg (McWilliams) and the girls on breakdown decision making and I worked with Les on fringe defence. Really technical, really good.

“Then we travelled the next day. The last few days has been about bedding in. Training has gone really, really well. The focus has been primarily on defence because that’s what is going to beat America. They have a really strong, direct attack.”

The 1991 world champions will present a challenge similar to England in Twickenham or France in Pau during the Six Nations.

Nothing has been left to chance. Despite some unnecessary edicts being foisted upon the squad by the IRFU communications department, funding for women’s rugby has grown exponentially in the past three years from €265,655 (2011/12) to €681,078 (2012/13) to €1.4 million this season.

That coincides with the Irish Sports Council giving the union €3 million this season – €275,000 goes directly to the women’s High Performances Sevens programme.

The most realistic way Ireland can make the semi-finals is to win this evening (kick-off 4pm on TG4) and for England to thump Canada on August 9th. That’s presuming a bonus point is achieved in defeat to the Black Ferns and Kazakhstan are well beaten.

Pool C – Australia, France, South Africa and Wales – should cancel each other out but the Canadians look best equipped to finish a comfortable second in Pool A, behind England, and therefore make the top four as the best runners-up.

“Strength does not come from winning,” McNulty tweeted Mahatma Gandhi recently. “Your struggles develop your strengths. When you go through hardships and decide not to surrender, that is strength.”

That night in Twickenham proved completely miserable for Ireland. Any time Niamh Briggs, Jenny Murphy and Sophie Spence are forced off prematurely then this team will struggle.

Murphy and Spence are the main power surge in the squad while Briggs is Ireland’s only long-range kicking option.

Since, there has been a dramatic improvement in the halfback stocks as Tania Rosser, one of Ireland’s greatest ever players, ended a four-year exile from the international stage.

“Tania has been exceptional in her attitude and dedication since coming back in,” Doyle added. “Tania is Tania, a cracking player, great decision maker, great leader of the backline. The girls are loving having her around.”

Ending with a positive tip of the hat to McNulty, who also likes to quote Phil Jackson, the legendary Bulls and Lakers NBA coach, about good teams becoming great “when the members trust each other enough to surrender the me for the we”.

The Irish women’s rugby squad have been trading the currency of We before Me since Coghlan and Cantwell made their debuts way back in 2001.

That’s what makes them so special. Skills and confidence have grown around this core belief.

Here also begins the final campaign for the Thelma and Louise of Irish rugby (although Cantwell has postponed her retirement).

Already they have inspired a generation of female rugby players. Here represents the last stand for the first group to have achieved such hero status.

So begins a daunting task but they’ve never known it any other way.