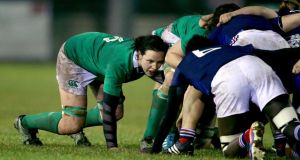 Last game in Ashbourne it seems. The IRFU, indicating that their senior women have outgrown this always welcoming rugby ground (every other Six Nations side play in stadiums), will be upgrading their home venue in 2016.

A Friday night double header in Donnybrook, alongside the male under-20s, would fill the 6,000 capacity, generate some much welcome revenue and make it very difficult for the national broadcaster to avert its gaze any longer.

But enough brain storming. Tonight there’s the small matter of the world champions coming to visit.

Their last meeting, in Paris last August, England pummelled Ireland to the harrowing tune of 40-7. Ireland players still express disappointment with their collective performance that day but they did engineer the perfect start with a try off Mas Reilly’s lineout maul. Clearly the best team in the world, England reacted with some stunning 15 women rugby.

Outhalf and captain Katy McLean, is the only back still on duty tonight. England are aiming for a podium finish at the Rio Games next year so Sevens takes precedence.

Much of the pack has also moved on but the physicality of flanker Alexandra Matthews and prop Rochelle Clark ensures they retain that intimidating aura. It wasn’t, however, enough to stop Wales beating them 13-0 in round one.

Ireland, if they can bottle their second half showing against France, have a real chance. Hannah Tyrrell following concussion but, otherwise, coach Tom Tierney fields the same team that lost 10-5 to a powerful France.

A little composure was needed to clinch victory or at least a draw. That and the eradication of handling errors, which only comes with time, and Tierney has had just three games and less than 10 sessions with the squad.

Still, they’re a group that always self police. They also firmly believe the last meeting with England didn’t reflect their standing in the game.

Ailis Egan, at tighthead prop, is playing sensational rugby at the moment. Paula Fitzpatrick is not far behind her, nor is Heather O’Brien. Larissa Muldoon, too, looks a much improved scrumhalf as she continues to keep veteran Tania Rosser benched.

In the end though it could be the impetus gained by the arrival of Rosser and Sene Naoupu that edges Ireland to victory. No reason why they can’t say farewell to their Meath fortress with a second Six Nations win over England in three seasons.

Composure is key, and more inventiveness out wide.