Morgan to wear the ‘unlucky for some’ number 13 jersey 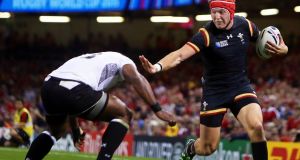 On Saturday at Twickenham that’s likely to be a novice, Tyler Morgan, two caps to his name and less than a month past his 20th birthday. Oh, and he’s just returning from an injury sustained earlier in the Rugby World Cup against Fiji.

Jonathan Davies (torn cruciate), Wales’s regular outside centre, never made it to the tournament. Scott Williams (knee ligaments) was invalided out of the tournament after sustaining the damage in the victory over England.

Corey Allen, who might have been able to fill in at 13, was already gone, having torn his hamstring against Uruguay.

Welsh backs’ coach Rob Howley admitted that Alex Cuthbert and North would be on the wings, with a discussion required about whether Morgan or James Hook would play at outside centre. The indications are that it will be Morgan.

“We have decided, probably, that George and Alex will be the wings to negate that threat.

“Tyler was picked in our squad as a 13; he had an injury last week. We have said over the last two years that we wanted to keep James (Hook) as a 10. What’s happened over the last five weeks has slightly changed that. We have spoken to James over the last few games about doing his homework at 12 and 13.

“I think Tyler played really well against Fiji, up against an experienced and physical player, something that we will defend against and attack against at the weekend. Maybe if it wasn’t for his injury, he might have started against Australia.”

Howley confirmed that Eli Walker, back in the squad after injury ruled him out initially, will not play against the Springboks, but if Wales were to advance, would be a contender for a place on the wing in a semi-final. Cuthbert, struggling for form, would be vulnerable.

Howley admitted: “International rugby is about taking chances. [Showing] the composure and the accuracy we had in the last 15 minutes in the England game, we go on and win it. We came up short [in not taking chances] against Australia and lose.

“It’s about being clinical, having composure and our composure could have been a little bit better in the Australian game. As long as you learn, you don’t make those same mistakes the next time.

“It was frustrating against Australia, being held up over the line on three occasions, losing the ball (on another). We created two-on-one, three-on-twos but came up short. That won’t stop us trying on the weekend.

“I think it will be a very different game, a huge kicking game. It’ll be an aerial battle and there won’t be many opportunities out there.”