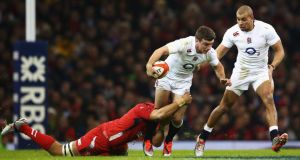 When it comes to England, I’m a five second man. There are many battles ahead on Sunday such as my absolute favourite: Mike Ross and Joe Marler at scrum time. Then there’s Ireland’s young midfield coming to terms with the wonderfully talented George Ford at ten and whether he’ll unlock/unleash/ unfetter Jonathan Joseph as he did brilliantly in Toulouse six weeks ago when Bath humiliated the Pink City. But, to get an insight into my thoughts, google the image of James Haskell and begin to imagine the breakdown.

If England keep that flow of ball from contact, through recycle and back to Ford to under five seconds they will win. The ebb and flow of possession and field position will allow our superior Irish half backs to maximise return by building the score board, but these five second are crucial. Less footballing talented players can look brilliant off quick ball. Those seconds afford Luther Burrell a much improved gain line to cause mayhem; but worse, they get Joseph into the tiniest of spaces. Here he is superb.

On the flip side, should Ireland struggle to beat their five seconds then it’ll promote an Irish half back kicking fest. Ireland currently struggle off slow ball, which is interesting as Joe Schmidt’s Leinster managed to reignite slow ball through creative restarts – particularly their clever interplays around a slow breakdown that shifted the ball away from traffic.

Brown’s absence will no doubt affect Ireland’s tactics: his energy and support lines especially off Ford will be missed. Alex Goode will not impact the ball like Brown and affords Sexton more options in his kicking. Ultimately Brown’s loss will be felt if England need resurgent energy as he is capable of igniting his flagging team through counter attacks and blindside rewinds.

Like all field games rugby is about creating and then exploiting space – Ford’s natural instinct has unleashed his Bath midfield all over Europe, most excellently in Toulouse. Joseph does both – he creates and exploits. He has incredible feet and can slip outside an over-committed defender. He picks superb lines and – when augmented with an inside dual runner such as Billy Vunipola – defenders sweating on the big man temporarily lose sight of Joseph. He knows this, as does Ford, so watch out when Ford is loaded with Vunipola and Joseph outside him. In those fractions of seconds Joseph is away.

The chop tackle is crucial to getting him on the deck quickly but watch his reading of them. When he senses over commitment, he often employs the most beautifully soft hands in world rugby to slide a pass into space. Cue Joseph. Vunipola’s brother Mako is equally blessed.

Defensively, England will have to readjust to Brown’s loss but there’s a bigger loss upfront. England will feel the absence of Joe Launchbury and Courtney Lawes in many aspects but especially their midfield defence. Lawes in particular makes massive hits miles behind the gainline which pushes his midfield much wider. Can secondrows Dave Attwood and George Kruis fill the field to make those big hits, thus sparing Ford et al multiple tackles? Can they slow Irish ball down by five seconds? Their performance will knock on to Ford who, with the right ball, will dictate tempo and free the outrageously talented Joseph and Vunipola.

Expect England to go off the top to Burrell. But it’s Joe Marler that holds the key to this fixture. Harlequins tick when Marler and Robshaw lead and Lancaster’s England are built on similar lines. Marler has become immense and if you find scrummaging boring jump inside Ross’s head when inches from Marler!

Wales scored in the eighth minute off an attacking scrum with Haskell completely missing Taulupe Faletau. But watch the scrum. Marler murdered Samson Lee and in doing so completely destabilised both scrums, unintentionally putting his backrow into a terrible position. That’s his ability (but was it the brightest example). So the timing of Ross’s exit is crucial to Ireland. He can’t wait until 13 minutes after the opposition’s replacements come on as he did against France.

England have gathered a talented squad of workaholics represented by their captain Robshaw and blindside Haskell where there’s no off button. Negate them, negate Marler and Ireland will gain those valuable five seconds – if not England will win. liamtoland@yahoo.com

1 Seán O’Brien: Anger over my parents’ break-up never left me
2 Will Connors chops his way to the front of Ireland’s openside queue
3 Gibson-Park, Earls and Kelleher all in race to make Ireland’s French finale
4 Dan Martin keeping it day-to-day as Vuelta proves challenging for riders
5 Madness or defiance? The GAA is taking a huge gamble in staging Championships
Real news has value SUBSCRIBE