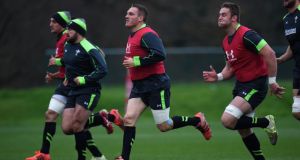 Gethin Jenkins will return to the Wales frontrow on Saturday, ready for a trademark punishing physical encounter against South Africa. The Cardiff Blues prop has recovered from a hamstring problem to win his 110th cap as Wales target a first major Southern Hemisphere scalp since 2008.

And Jenkins knows it will be another challenging afternoon at the coal-face.

“They [South Africa] have definitely changed their game-plan over the last couple of years, but they have kept some of their strengths.

“The maul is still strong and the scrum is still a focus for them. They are quite direct in their backs, and you know with Welsh teams what to expect. We know it’s going to be a physical battle.”

Jenkins, wing Liam Williams and hooker Scott Baldwin have all been called into the starting line-up as respective replacements for Paul James, George North and Richard Hibbard as Wales look to bounce back from last weekend’s defeat against world champions New Zealand.

South Africa field 11 of the All Blacks-conquering team and they will start as favourites, given a run of 16 successive victories against Wales.