Ireland fullback understood to have picked up calf injury in training 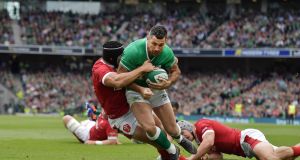 Rob Kearney has emerged as the latest injury scare ahead of Ireland’s opening  Rugby World Cup Pool A match against Scotland next Sunday.

The experienced fullback, who looked back to his best against Wales in the final World Cup warm-up game, would have been sure to start against the Scots. It is believed he suffered a calf injury in training today.

The fear is that the 33-year-old is now a significant doubt for both the Scottish game and the ensuing match against Japan six days later.

Ireland have already lost Robbie Henshaw for the Scotland game due to a hamstring injury although the centre will remain with the squad in Japan. Ironically, Henhsaw had been used at fullback against England in the opening game of the Six Nations earlier this year.

The likelihood is that, should Kearney miss the Scottish game, Jordan Larmour or possibly Andrew Conway will wear the number 15 jersey.