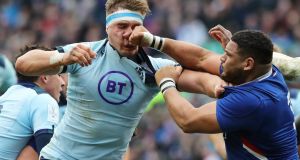 Imagine it. Alleged robber to play for Ireland against France in the Aviva Stadium. Outside The Bridge Bar there are absolute scenes. Joe Duffy and the lines humming and a pox on the house of the IRFU. What kind of message?

Paddy Jackson and Stuart Olding found out just how swiftly the venerable union can move. When brows began to furrow at Lansdowne Road as the rugby image started to tarnish and the principal sponsors began to shift uneasily, the IRFU had the players’ contracts revoked just weeks after the not guilty verdict in the Belfast rape trial.

But Ireland is not France, which is why Mohamed Haouas will anchor their frontrow today. Unsurprisingly, it was there that both Irish players ended up, when they were forced out of Ulster, Jackson in Perpignan and Olding with Brive. A different way of looking at life, a bigger country where moral outrage is set at a lower volume.

Some will certainly claim France need to polish up their virtue signalling, others will see the French-Algerian’s inclusion as admirable or even an important gesture in a country fracturing along ethnic and religious lines, most recently this week in Nice.

For French rugby it is also a demonstration to the world they don’t care too much about the sewing circle gossip of other unions, their view being to just suck it up. That is, the troubled background of Haouas and the upcoming investigation for alleged involvement in the robbery of a tobacconist.

To further colour the selection, the French prop will unapologetically line out against Ireland with an old school fondness for using fists to end disputes and a splashy disciplinary record.

But the French are sticking with the 26-year-old talent, not for political gestures or for national interest, but because he is their best tighthead option in the country and young at that.

First the rap sheet. In 2018, Haouas punched Montpellier teammate and former Springbok prop Jannie du Plessis in a bizarre brawl involving colleagues, which was caught on camera, while two years before he was in the thick of one of the most beloved events in army and navy sport, an all-in, free-for-all punch up. Benches included.

Although Haouas was at that stage yet to make his name in professional rugby, the scrap went viral and was consumed over 1.5 million times on YouTube. Four years later he would be invited by French head coach Fabien Galthié into the national squad.

The 123kg forward also grabbed attention earlier this year when he was red-carded in the Six Nations for landing a haymaker on Scotland flanker Jamie Ritchie. Given a three-week ban the player they call ‘Momo’ ultimately got off thanks to the pandemic. He was deemed to have served the ban as French rugby ground to a halt in March.

He then missed the opening game of the Top 14 season after arriving late to a training session before becoming involved in an altercation with a club sponsor.

Born in France, as a teenager Haouas was arrested for a series of break-ins and robberies of corner shops and spent five years under judicial supervision. His passport was also confiscated and his movement supervised.

What is more pressing for the player, who took up rugby at a relatively late 15 years old, is that he is set to appear before a criminal court for questioning just eight days before the start of the 2021 Six Nations Championship.

A Montpellier public prosecutor’s department said Haouas will be interviewed regarding an alleged robbery of a tobacconist six years ago. He has previously spent four days in a remand centre for his suspected involvement in the 2014 incident.

“The past I do not care,” said an existential sounding French forwards coach William Servat. “What matters for me is the player I have met, the person I have met.”

It would be interesting to see how the IRFU would handle a player like Haouas, with his baggage, his fiery temperament and storied history of physical confrontation, however unlikely it is someone with his background would make it to a provincial or national team.

For example, in the Jackson and Olding case, the IRFU, in their justification, put out a statement in which they acknowledged their “responsibility and commitment to the core values of the game: respect, inclusivity and integrity.”

But there is a rugby reality for Servat and Galthie, who essentially cleaned out the French squad of players over 30 years old. It is that Haouas is regarded by the coaches as technically strong in the scrum and can turn on the jets around the fringes and in loose play. He is mobile and, red cards aside, his usually attentive approach to training sessions has turned the coaching staff not away but towards him.

“He’s the forward at Montpellier who has the best stats for movement and activity during a match,” observed Servat. “He has a profile of a tighthead prop capable of catching a back who has broken the line.”

For Ireland’s frontrow of Cian Healy, Rob Herring and Andrew Porter, the aggressive confrontational aspect of his play, the personality edge he brings and the reputational dark side won’t faze them. But harnessed and directed he is clearly worth the distraction and the heat he has drawn to Galthié and the squad.