‘It is imperative to go after him, to tire him so that he finds it tough to make the calls’ 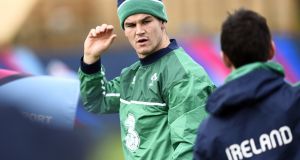 France have vowed to hunt down Johnny Sexton in Sunday’s Rugby World Cup clash at the Millennium Stadium. Photograph: Afp

The pre-match psychological warfare in advance of Sunday’s Pool D showdown was ratcheted up a notch or two yesterday, with plenty of musings from Racing Metro players of their intention to target their one-time teammate, Johnny Sexton.

No doubt this also recognises the threat posed by Sexton, but following on from the self-serving critique of Sexton from his former coach Laurent Labit, one-time Racing Metro teammates openly, if perhaps a little mischievously at the behest of French journalists who kept prodding them on the same theme, spoke of their focus on the Irish out-half during their media briefing at the Vale of Glamorgan yesterday.

The loose-head prop, Eddy Ben Arous, was the most open, stating: “I know that he is slow in getting rid of the ball, I am going to try and put the maximum pressure on him. I am going to hunt him down as often as possible. We are going to go after him 200 percent because he is the strong man of this team.”

Alexandre Dumoulin, the inside centre who played alongside Sexton and is expected to be on the French replacements’ bench when Philippe Saint-André announces his side tomorrow, said: “Jonathan Sexton is first very hard with himself. And being very hard on himself, he is very hard with others. He is very demanding with others. He is a winner, a competitor. Whenever he goes out on the pitch, it is to win matches.”

“Inevitably, his approach is certainly better at home than it was with us, the French. When he arrived at Racing, there was the language barrier. We do not understand him all the time. It took training and playing together to know each other better. It was better at the end but I think that during these two years, it was sometimes difficult for him.”

Dumoulin accepted that Sexton is an opponent to fear. “Of course. He is a great player who can adapt to all situations. He has a quality foot kicking game and is also a very good player with the ball in hand. He will not make clean breaks in every game but he knows very well how to manage the game.”

Asked if Sexton had any weaknesses, the Racing and French centre smiled and said: “Yes, but I’m not going to tell them. He is like every player. He has very strong points but also some weaknesses.”

As when Ireland encountered France last February, when Sexton returned to action after an enforced three-month break due to concussion, it will merely be a question of time before Mathieu Bastareaud is sent thundering down Sexton’s channel.

Dumoulin hinted that this will be a major part of the French tactics. “We talked about the game plan that we try to put in place against Ireland. We know that like all other countries, if a number ‘10’ is compelled to tackle a lot, he will be tired and therefore a little less lucid in the decisions he takes during the match. To target him might be a solution but not the only one to beat this Ireland side.”

Asked what it is that makes Sexton nervous, Dumoulin said: “This is a player who likes to rule his team and the game. There are little things like pulling his jersey that can get him out of his game.”

Perhaps not co-incidentally, three of the five French players brought before the 50-strong French media yesterday are Racing Metro players, and their classy full-back Brice Dulin (who is expected to start on the wing against Ireland) maintained the theme.

“It is imperative to go after him, to tire him so that he finds it tough to make the calls. He has a certain manner of playing for Ireland. He loves hugely to be in the vanguard in order to build the attacks. Behind, he is capable of taking the pressure off at any moment. It is of the greatest importance to be able to read him in his attitude, his positioning, to anticipate what he is going to put into motion.”

No doubt all of this will merely prompt a wry smile from Sexton himself.