Four changes to Ireland Women’s side for game with Wales 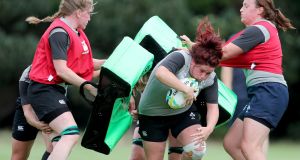 Ireland Women’s coach Adam Griggs has made four changes from the side that beat Italy for Sunday’s Six Nations clash against Wales at Donnybrook (3pm).

Two of those come in the frontrow where Griggs has brought in Galwegians hooker Ciara O’Connor and Highfield tighthead prop Leah Lyons after they came off the bench in 21-8 win over the Azzurri, with Cliodhna Moloney and Fiona Reidy dropping to the bench. Lindsey Peat remains at loosehead for the game.

Nichola Fryday is partnered in the secondrow by Orla Fitzsimons, with Paula Fitzpatrick moving to munber eight. Captain Ciara Griffin moves to the blindside, with Claire Molloy completing the backrow.

There is one change in the backline with Claire McLaughlin starting for the injured Alison Miller on the left wing.

“We got a good boost after the win over Italy a fortnight ago,” said Griggs. “We did what we wanted to, played with tempo and moved the ball. While the performance was far from perfect, we set a marker down for the rest of the campaign.

“We now head into a tough test on Sunday against the Welsh. We are looking to rectify some of the areas of our game that we haven’t been happy with over the past few weeks and if we can make those small changes, it should be a great one.”