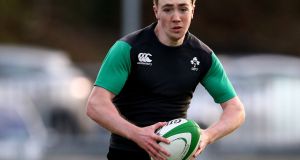 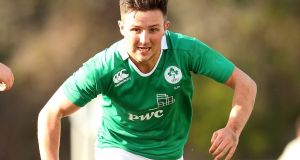 On February 2nd, 1991, Rob Saunders, made his debut for Ireland, the first of 12 tests, captaining the team against France in a Five Nations Championship match at Lansdowne Road. It was Michael Kiernan’s swansong in an Irish jersey, making his 43rd and final appearance for his country.

Twenty five years later, the two men sat in the stand at Donnybrook last March, and in the 72nd minute of an Under-20 Six Nations match between Ireland and Italy, their respective sons, Niall Saunders and Paul Kiernan, stood shoulder to shoulder on the touchline, preparing to share the experience of their first caps at that particular age-grade.

Five minutes earlier, Terry Kennedy, son of the former Ireland wing Terry – he won 13 caps for Ireland between 1978 and 1981 – made his second appearance of the season for the Ireland U-20s, having celebrated his debut as a replacement against France the previous month. Terry Snr also watched from the stands at Donnybrook.

Last Wednesday at the Manchester City academy stadium, scrumhalf Niall Saunders, centre Paul Kiernan and right wing Terry Kennedy made their first starts for Nigel Carolan’s team in a 35-7 victory over Georgia that guaranteed Ireland a place in the semi-finals of the Under-20 World Championship.

Kiernan captained the side, Kennedy was a try scorer, and Saunders, at 18-years-old and the baby of the squad, offered a very polished performance: three young men playing in exactly the same positions as their fathers had with distinction all those years ago.

Mick Kiernan and Terry Kennedy were present in Manchester to watch the Georgia match but Rob Saunders, because of business commitments, had to be more innovative to catch the game.

He explained: “I watched the Georgia match in my hotel room in Hong Kong. I could not get the game streamed on line, so my daughter had the good idea to FaceTime the game from the TV at home to my mobile. So although alone (in Hong Kong), we did watch it as a family albeit 10,000 miles apart.”

Ireland had already beaten Grand Slam champions, Wales, and world champions, New Zealand but with 13 changes for the Georgia match and the fact that the latter scored a converted try early on to go 7-0 up.

Kiernan admitted: “It was a nervous feeling before the game. Paul hadn’t been involved in the previous two matches. He was made captain for the Georgia match. It was a pretty important game in the sense that Ireland needed to win to go the semis and if they lost they wouldn’t be going to the semis.

As the game went on and they started taking control it made the nerves a bit easier. I enjoyed the experience of it after the game. I have been watching him playing for the last 14 or 15 years. Every single game you have one eye on him first and then you are looking at the overall picture of the match.  Can I remain calm? No, not at all.”

Saunders too describes himself as a “nervous watcher, especially over the last few years as the level Niall is starting to play at, gets higher.” Kennedy draws on his playing days to remain relatively calm. “I don’t get that excited because I have been down that road myself.

“I know Terry got a try but I wouldn’t have jumped up and celebrated. I’m not very vocal. I know that I am vocal otherwise but not watching a match. You are too close to them and they can hear your voice. Terry would recognise my voice if I said anything, good, bad or indifferent, so I don’t.”

So do the boys come to their fathers for advice? The short answer is yes. Saunders elaborated: “Anyone that knows me would not be surprised to hear I am not shy of advice or an opinion so of course Niall and I talk constantly about the game.

“However, over the last few years he had had the opportunity to work with some excellent coaches both at Harlequins and Ireland, so they are better served to develop him. Our role as parents is now one of support really; he uses me as a sounding board and is keen to get my views on performances. I try and offer a few things before each game for him to focus on.”

Kiernan explained: “We talk about it the whole time. It is pretty much a rugby house. His older brother James plays as well with UCC. The topic is pretty high up in terms of daily discussions.”

Paul Kiernan had explained in a previous interview that he’d occasionally dig out some old videos of Mick’s playing days and put them when he had friends around. Mick laughed: “They make these little gifs just to take the piss. It’s a different generation now. Some of the things that you thought were buried they can rehash them.”

Kennedy is conscious of not foisting sepia tinted recollections on his son. He chuckles: “You can’t start giving them ideas of the way we played rugby 30 years ago because they play in a totally different manner. I give a lot of encouragement, I won’t criticise and even if he makes a mistake I won’t start harping on that. I will look at the five or six good things that he has done.

“There is enough video analysis to point out mistakes so I will encourage him with the things he did on a positive note. There has to be a person there who is a positive part of his psyche and that is where I come in.”

The tangle of the rugby’s past and present is very evident. Niall Saunders played with Gavin Mullin, Brendan’s son, for the Ireland Under-19s this season. Terry Kennedy watched the Georgia game with former Lions and Ireland flanker John O’Driscoll and received hundreds of texts including ones from Brendan Foley, Ollie Campbell and Mick Quinn.

Kiernan and Saunders caught up with Ralph Keyes and Donal Lenihan after the aforementioned game in Donnybrook.

On Monday Ireland will try to muscle past Argentina (live on Sky Sport and TG4, 5.30) for a place in the Under-20 World Championship final; all three families will be present. There is one more connection to reveal, especially for those who place some store in positive omens.

In 2004 Ireland reached the U-21 World Cup final in Glasgow where they were beaten by New Zealand. Mark McDermott coached the side. He is the brother of Terry Kennedy’s wife, Rosie, proving that there are so many diverse ties that bind this current Irish U-20 side to the past.