Eddie Jones: Johnny Sexton’s parents will be worried about him

‘Are we supposed to not run at one player?’ England manager talks about Irish outhalf 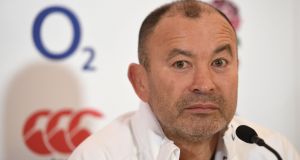 England boss Eddie Jones has heightened tensions with Ireland by claiming Johnny Sexton’s parents will be worried about his long-term health.

Jones claimed Ireland out-half Sexton’s parents must harbour concerns about his well-being after his latest fitness scare in Ireland’s 10-9 defeat to France, branded a “whiplash injury” by Joe Schmidt.

Sexton appeared dazed on leaving the Stade de France pitch in the closing stages of the Saturday, February 13th clash, but has since made a recovery.

The 30-year-old will start Ireland’s RBS 6 Nations clash with England at Twickenham on Saturday, with Jones further intensifying strong scrutiny over his head injury saga, which saw him stood down for 12 weeks in 2014 after four concussions inside 12 months.

“Sexton is an interesting one, they’ve talked about him having whiplash injury which is not a great thing to talk about,” said Jones, after confirming Maro Itoje will replace the injured Joe Launchbury to make his full debut for England on Saturday.

“I’m sure his mother and father would be worried about that. Hopefully, the lad’s all right on Saturday to play.”

France have made a big issue out of deliberately targeting Sexton in recent clashes, and repeated the tactic in Paris, with Yoann Maestri receiving a citing commissioner’s warning for a late hit on the Leinster outhalf.

Ireland have been extremely careful to outline their complete trust in top medical professionals over Sexton’s health and fitness, especially where head injuries and concussions are concerned.

Former Ireland international George Hook has repeatedly called for Sexton to think very carefully about an early retirement given his history of concussion.

Each time outside observers question Ireland’s handling of Sexton, head coach Schmidt has kept his calm and insisted the national team adhere to the highest standards of safety and due care for one of their top stars.

England head coach Jones had already ratcheted up the tension with the Irish by claiming Schmidt’s side kick 60 per cent of their possession.

The wily Australian bristled however when quizzed on whether England could legitimately target opposition out-halves in Test rugby.

“We target players all the time. That’s part of rugby is it not? Is there some sort of special law there?” said Jones.

“There are 15 players out there. Are we supposed to not run at one player? Hang on, hang on, he’s got a red dot on his head, we don’t run at him.

“I’m not saying Sexton is a weak defender. Maybe France did. We’re going to be targeting players in the Ireland side.

“We want to win and you win a game of rugby by attacking their weak points and to say that’s unfair is just ridiculous.”

Ireland boss Schmidt insisted Sexton is “absolutely” fully fit and ready to face England on Saturday, before lamenting yet more outside commentary on the linchpin outhalf.

Schmidt insisted Ireland will waste as little time as possible over Jones’ latest verbal barbs, but privately Ireland will be frustrated with another neutral observer offering advice on Sexton’s long-term future.

“I think we’re probably less affected by those extraneous things than you people are,” said Schmidt.

“Because if we’re distracted by that, then that’s something that we’re wasting energy and time on.

“We get little enough time together as it is.

“And we’re all about making sure that we can be organised, enthusiastic, well-recovered, not distracted.

“We know how eager, fit and able the players are, and he’s a good example of someone who’s very eager this weekend and I think you’ll see that this Saturday.”