Dylan Hartley: Hooker intends to let rugby do the talking 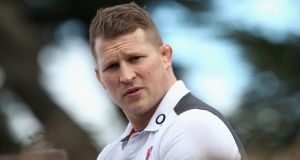 Dylan Hartley: One of the few sportsmen who instil fear with a look. Photograph: Getty Images

Mike Tyson used to do it. Brian Cody still can. Dylan Hartley is one of the few sportsmen who instil fear with a look.

You know he can’t hurt you but, having seen what he has done to others, that dark-eyed stare, unblinking even after you do, causes the briefest shiver.

Hartley has accumulated 40 weeks of suspensions off six incidents since 2007. He has bitten England team-mate James Haskell and Johnny O’Connor in the same game, gouged Stephen Ferris and repeatedly smashed Rory Best. That betrays an uncontrollable rage.

This list of indiscipline, like calling Wayne Barnes “a f**king cheat” in the 2013 Premiership final, which cost him a Lions jersey, does not include a forearm drop on Richie McCaw in 2010. He knew full well his faded Kiwi lilt, having travelled north as a teenager, would guarantee the full ferocity of All-Black retaliation. Still, he dived in. Brad Thorn got to him first.

But that’s who Hartley is. There will be acts of thuggery that bring his position of authority, as Northampton captain, into question. The team he represents will be adversely affected when he lashes out instead of turning the other cheek.

“I know when I’m right I can do the business on the day,” is a defence that usually satisfies a rugby coach.

Some mitigation then. Stuart Lancaster, the England coach who has grown a squad and his own standing within the game on the pillar of discipline and a unity of purpose, remains loyal to the 28-year-old.

Came out to play

“I was well aware to keep my head down,” Hartley said. “That’s why you haven’t seen me the last few weeks. That was a conscious decision. Just go back to basics. Let my rugby do the talking.”

Recurring yellow and red cards are bought up. “I don’t think anyone on the field wants to get involved in that. You know there is a fine line and they seem to find a way to me. I’m well aware of that when I take the field.”

Targeted by opponents? Cold, hard stare. “No, not at all. No.”

He’s actually a likeable 28-year-old with a hidden sense of humour that comes to the surface when controlled ferocity is discussed.

“What you need to do is be confident in what you have done during the week, backed up by a sustaining intensity for 80 minutes. It’s not head banging type stuff anymore.”

“Obviously certain things haven’t worked for me before. The older I get I have started to learn that a bit better.”

He even dismisses any idea that his role is that of enforcer.

“I’m not an enforcer. I’d say someone like Billy Vunipola is our enforcer. I like to work. My set-piece is my first and foremost role. I’d say that’s why Lani [Lancaster] has got me in the team, [he’s] confident in my ability there.”

Most of all he’s sick of losing, mining that harrowing European failure against Leinster in 2011, as the search for the trophy Paul O’Connell lifted last March reaches a crucial juncture on Sunday.

“We want to be champions. I don’t think there is any shame in saying that. You don’t want to be plucky losers. We have experienced a lot of near misses against big teams. The South Africa tour, France last year in the Six Nations, the All Blacks even, we have come close.

“At some stage it has to come right for this team. From the way we have started we’d be confident but I suppose it all does come down to this weekend.”