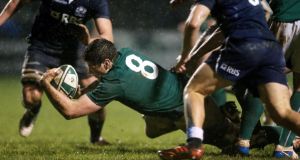 Ireland U-20 34 Scotland U-20 7: A superb display by a dominant set of forwards saw Ireland get their U-20 Six Nations campaign off to a flying start in very difficult conditions at Dubarry Park in Athlone last night.

A victory by four tries to one was never in doubt for Mike Ruddock’s men who controlled proceedings throughout and only conceded in the final play of the night.

The heavy rain made constructive rugby almost impossible but it was apparent from the early stages that the Irish lineout and scrum was superior.

That gave Ruddock’s men a strong platform to build and they took full advantage in the opening half and were well worth their 20-0 interval lead.

Ireland played with patience and confidence and slowly wore down the Scottish resistance, with a couple of penalties in the opening 14 minutes from impressive outhalf Ross Byrne settling them

Opted for touch
Scotland’s 18-year old Ben Chalmers, a son of the former Lion Craig, opted for touch for his first penalty but they lost the lineout, while a penalty from a similar position went the wrong side of the near post.

Ireland started to build the phases with the forward dominance really beginning to control the game and after taking a scrum against the head they kept possession and drove through with number eight Jack O’Donoghue eventually spotting a gap and squeezing over after 28 minutes.

Byrne added the extras and did likewise with the final kick of the half after another series of surges coughed up a try for one of last year’s survivors Peadar Timmins. Ireland continued to dominate after the restart with O’Donoghue, Sean O’Byrne and Dan Leavy doing most to take the battle to the Scots.

Both sides emptied their bench but Ireland continue to control proceedings and they finally pulled further in front after 58 minutes when O’Donoghue got his second try with a tap and go, although he had to go off after injurying himself in the process.

Superb tackle
A superb tackle by Ian Fitzpatrick on replacement Ruaidh Young set up the fourth Irish try 12 minutes from time and Oisin Heffernan was credited with the touchdown as himself and O’Brien bundled over the line. Byrne added his fourth conversion of the night.

Scotland never gave up and were rewarded in the final play of the night when replacement scrumhalf Ben Vellacott chipped and chased to score, with Ben Cooper adding the conversion from the right.